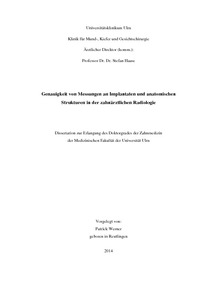 Length measurements on radiographs take an important role in dental practice. Objectives of this study were, first, the comparison of the X-ray dental film method, the panoramic radiography and the Cone beam computed tomography (CBCT) and secondly, the comparison of two panoramic dental x-ray machines and three different CBCT-units in terms of their metric accuracy. In this study, five mandibular specimens by human body donors were used. Implants were placed in three of the five mandibles. For the experimental procedure dental films, panoramic radiographs and CBCT-reconstructions were made. In each radiograph the length of a defined measuring distance was compared with the measurement of the same distance on the body donor. The examples in this investigation have demonstrated that accurate measurements on radiographs or in three-dimensional-reconstructions are possible. There were cases where the lengths measured in the X-ray images were equal to the measurements at the specimens. The CBCT turned out to be a very accurate measuring instrument. By comparing the three CBCT-units no difference appeared concerning the metric measuring accuracy. But in our case the dental film and the panoramic radiography have proved that they also can provide very accurate results. However, the dental film and the panoramic radiography are also more prone to measurement errors and misinterpretation. The transmission of radiographic measurement result in the clinical situation is a major problem. The CBCT has emerged as a very accurate measuring instrument. As a standard tool for basic examination or treatment in simple cases, however, the panoramic radiography and the dental film are sufficient and recommended. In more complex cases modern three-dimensional radiological diagnostics and planning should be used.