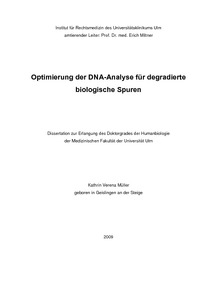 Nowadays more and more difficult biological stains are taken up at crime scenes, i.e. stains, polluted with environmental contaminants or stains with highly degraded and LCN DNA, thereunder telogen hairs and hair shafts. Inhibitors, which are present in many stains, can disrupt the PCR reaction, unless they cannot be separated from the DNA during the extraction. To increase the chances of a correct typing of degraded biological stains, the small amount of DNA must be successfully isolated and the inhibitors have to be removed or neutralized. A modified GEN-IAL extraction in combination with a silica-purifaction could be successfully used for such stains. For the PCR optimization several polymerases, buffers, PCR additives were tested. A PCR optimization could be successfully exercised for bloodstains and hairs. The inhibitory effect of the hair pigment Melanin could be compensated by increasing the MgCl2- and polymerase-concentration. DNA from blood could be successfully amplificated by using a polymerase which is less sensitive to the haemoglobin. Weak stains with highly degraded DNA may be hard to analyse due to the long amplicon lengths produced by the commercial STR kits. To increase the success rate especially in typing degraded biological stains, sensitive STR multiplex kits with shortened amplicon lengths are useful. Therefore two sensitive STR (Short Tandem Repeat) kits were developed. Compared to commercial kits the amplicon lengths were significantly reduced. The autosomal STR multiplex (Q8) comprises the German DNA database systems. The gonosomal STR multiplex Y13 comprises 13 Y-specific STR-markers. Male DNA in a mixed stain with excess of female DNA could be analysed using the Y13, while typing with autosomal markers would be no more practicable. Compared to commercial STR kits these two concepts (Q8 and Y13) resulted in considerably higher success rates for degraded biological stains, which are often found in the forensic casework testing.