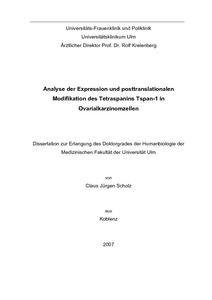 Members of the tetraspanin family of membrane proteins were shown to have implications in various diseases including cancer. Based on the results of expression profiling of ovarian carcinomas or derived cell lines it was suggested that Tspan-1, a widely uncharacterized tetraspanin, might substantially contribute to the malignant phenotypes of these cells. In this investigation, a set of novel anti-Tspan-1 antibodies was generated by immunization of rabbits with three different synthetic peptides representing parts of the Tspan-1 sequence. Immunohistochemical staining of serous-papillary (n = 44), mucinous (n = 15) and endometrioid (n = 11) ovarian carcinomas with these antibodies revealed a consistently strong expression of Tspan-1 in all subtypes, of which the endometrioid carcinomas showed the strongest expression. Specific immunoreactivity was detected mainly in intracellular vesicles and to a lesser extent in the plasma membrane and the endoplasmic reticulum (ER). Tspan-1-EGFP fusion proteins were subject to heterogeneous post-translational modification with N-glycans that were found to be attached to all four putative N-glycosylation sites. Only the two C-terminal N-glycans are further processed from high-mannose to hybrid or complex-type carbohydrate structures. Fluorescence microscopy of ovarian carcinoma-derived cell lines in which wild type or glycosylation-deficient mutant Tspan-1-EGFP were expressed, confirmed the localization of Tspan-1 observed after immunohistochemical staining but also indicated that ER-retention and occurrence in the plasma membrane were dependent on the number of glycosylated sites, suggesting an involvement of glycosylation in the post-translational control of Tspan-1 expression on the cell surface. In summary, results of this study supported an important role of Tspan-1 in ovarian carcinoma cells and point to glycosylation at all potential sites as a modification relevant for localization and functions of this tetraspanin.