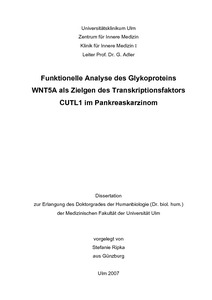 Previously, we have identified the transcription factor CUTL1 as important mediator of tumor invasion and target of TGFb. Using high-throughput approaches, we identified several putative downstream effectors of CUTL1, among them WNT5A, a secreted member of the Wnt multi-gene family. The aim of this study was to investigate the role of WNT5A as a novel target of CUTL1 in pancreatic cancer. CUTL1 and WNT5A were stably overexpressed as well as transiently and stably knocked-down by RNA interference. Effects on proliferation, migration and invasiveness were investigated by thymidine incorporation, Boyden chamber experiments and time-lapse microscopy. Expression of WNT5A in pancreatic cancer tissues was analyzed by real-time PCR and immunohistochemistry. We also analyzed the effect of CUTL1 and WNT5A on TRAIL-induced apoptosis using knock-down by RNAi and quantified apoptosis by FACS, TUNEL-assays, PARP-cleavage and caspase-3/7/8 activity assays. We found that CUTL1 transcriptionally upregulated WNT5A on RNA, protein and promoter level. WNT5A significantly enhanced migration, proliferation and invasiveness, mediating the pro-invasive effects of CUTL1 to a major extent. WNT5A effects were accompanied by a marked modulation of marker genes associated with epithelial-mesenchymal-transition (EMT). Using real-time PCR and immunohistochemistry, we found that WNT5A is up-regulated early during pancreatic cancerogenesis in pancreatic intraepithelial neoplasias (PanIN lesions) and in invasive pancreatic adenocarcinomas, as compared to normal pancreas tissues. Furthermore CUTL1 and WNT5A are playing a significant role in modulating resistance to apoptosis in pancreatic cancer. Knock-down of CUTL1 and WNT5A resulted in significantly enhanced TRAIL-induced apoptosis, associated with increased PARP-cleavage and acitivity of the caspases 3, 7 and 8. These data identify WNT5A as important target of CUTL1 and as novel mediator of invasiveness and tumor progression in pancreatic cancer.