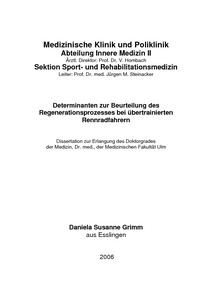 We examined in our study which determinants are suitable to indicate a state of overtraining in 7 well-trained road cyclists and if they normalize during a following 5-week-period of regeneration. Data were acquired at three laboratory-tests and three field-tests before, during and after the regeneration period. The results can be divided into three groups. Into the first group we split up parameters which did not change during the whole examination period, for example neuromuscular excitability and most of the plasma hormones. Part of the second group were those parameters, which showed their maximum or minimum as expected after the overtraining period and normalized during the 5-week-regeneration period, for example the excretion of nocturnal catecholamines, the plasma catecholamine dopamine, lactate and testosterone. Into the last group belonged parameters, which deteriorated in spite of reduced training volume (227 km/week in regeneration period I) and recovered during regeneration period II (with a training volume of 183 km/week). Part of the last group was the hormone response of cortisole and ACTH, the mood states of the cyclists and the plasma catecholamines adrenaline and noradrenaline. The findings suggest that a reduction of training volume of 48 % (227 km/week) in overtrained athletes means still too much strain to regenerate the chronic overloaded system. Finally the reduction of training volume of 58 % (183 km/week) for further three weeks showed the expected improvement of mood state, the normalization of the increased plasma catecholamines adrenaline and noradrenaline and clearly increased results for the suppressed distribution of cortisol and ACTH.