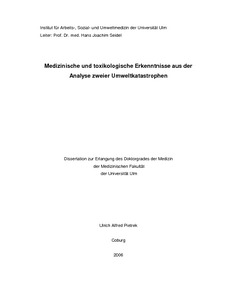 Two environmental disasters will be analyzed: The Seveso (Italy) accident in summer 1976, where TCDD was produced and released on an urban area and a hazardous inquiry in Iraq during winter 1971/72 caused by methyl-mercury. They raised several medical problems. The assessment of the health hazards had to rely on the detection by chemical analysis of the toxins in the environment and on the definition of an area contaminated by the toxin. Evacuation of the population was the only possible preventive measure for precluding or at least strongly reducing further exposure in the Seveso case. Of the known clinical symptoms of the TCDD toxic effects on humans, the typical skin lesions (chloracne) appeared almost only in younger people. In Iraq about 450 humans lost their life consuming wheat treated with methyl-mercury. The toxicological effects and the social and political consequences were described and evaluated.