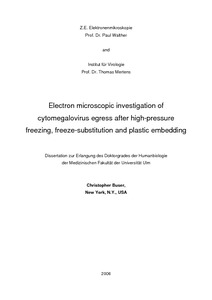 Modern cryo-preparation techniques for biological electron microscopy have a great impact on the preservation of the sample structure. Among these, high-pressure freezing, freeze-substitution and plastic embedding of cell cultures for transmission electron microscopy allows new insights into various processes in cell biology due to its superiority over conventional preparation by chemical fixation. This technique was used here to morphologically characterise the phenotypes genetically manipulated cytomegaloviruses. To better visualise the stages of viral morphogenesis, the freeze-substitution protocol was optimised by addition of osmium tetroxide and uranyl acetate dissolved in water to substitution media based on acetone. Using this approach the viral morphogenesis of cytomegaloviruses was reinvestigated. It was observed that the viral nuclear egress by budding into the perinuclear space does not occur at the nuclear periphery as postulated. Instead, cytomegaloviruses induce deep tubular infoldings of the inner nuclear membrane, through which nucleocapsids bud to acquire their primary envelope and access the perinuclear space. Also in the cytoplasm several structural intermediates were seen that are not adequately explained by current models. The following mutant viruses were investigated for their ultrastructural phenotypes: In the murine cytomegalovirus morphogenesis, the proteins pM97, pM48.3, and pM50 were implicated in nuclear morphogenesis. In the human cytomegalovirus, pUL97 was suggested to have a similar function in nucleocapsid formation as its homolog pM97. Additionally, the two proteins ppUL35 and pUL35A were implicated in defects in nuclear morphogenesis and cytoplasmic tegumentation, respectively. Taken together, these results demonstrate the power of the combination of cryo-preparation techniques with genetic manipulation of cytomegaloviruses in elucidating the mechanisms of viral morphogenesis.