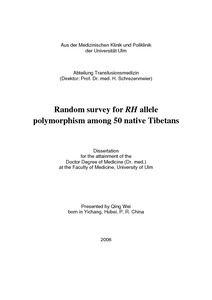 Rhesus D (RHD) allele distribution varied significantly among different population. However, no data are available for people, like Tibetans, living at extreme altitudes, where the oxygen density is decreased. A comprehensive study has been performed to define the Rhesus (RH) allele polymorphism and RH haplotype distribution in 50 native Tibetans. Nucleotide sequencing from genomic deoxyribonucleic acid (DNA) for 10 Rhesus D gene (RHD) exons in all of 50 samples plus 10 Rhesus CE gene (RHCE) exons in 8 selected samples was performed. A polymerase chain reaction with sequence specific primer (PCR-SSP) was used for RHCE genotyping and a PCR with restriction fragment length polymorphism (PCR-RFLP) for RHD deletion testing. A total of 10 different polymorphic patterns have been obtained, in addition to one known RHce(W16C) allele, four novel RH alleles RHD(T55T), RHD(S119S), RHD(P323H) and RHCE(V398E) were detected, whose molecular bases have been defined. Three of which dubbed aberrant RHD allele, one belonged to aberrant RHCE allele. All of them were in trans with normal RH allele, which lead to be present of normal phenotype. Our result in molecular level is agreement with previous finding in serological level that CDe was the most prevalent haplotype, haplotype cDE was the second most frequent in the Tibetan population. As expected, high frequency of homozygous RHD gene was found in Tibetans. We conclude that it is necessary to survey RH polymorphism in different population. By a systemic screening, reliable and detailed population genetic data can be obtained. Such results can be used to guide transfusion and testing policy for patients and donors, and eventually will pave the road for mass-scale genotyping in the Rh blood group.