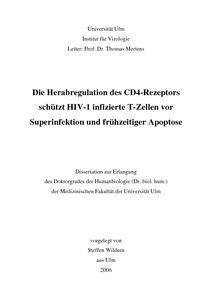 Human immunodeficiency virus type 1 (HIV-1) utilizes Vpu, Env, and Nef to down-modulate its primary CD4 receptor from the cell surface, and this function seems to be critical for the pathogenesis of AIDS. The physiological relevance of CD4 down-modulation, however, is currently not well understood. In the present study, we analyzed the kinetics of CD4 down-modulation and the susceptibility of HIV-1-infected T cells to superinfection using proviral HIV-1 constructs containing individual and combined defects in vpu, env, and nef and expressing red or green fluorescent proteins. T cells infected with HIV-1 mutants containing functional nef genes expressed low surface levels of CD4 from the first moment that viral gene expression became detectable. In comparison, Vpu and Env had only minor to moderate effects on CD4 during later stages of infection. Consistent with these quantitative differences, Nef inhibited superinfection more efficiently than Vpu and Env. Notably, nef alleles from AIDS patients were more effective in preventing superinfection than those derived from a nonprogressor of HIV-1 infection. Our data suggest that protection against X4-tropic HIV-1 superinfection involves both CD4-independent and CD4-dependent mechanisms of HIV-1 Nef. X4 was effectively down-regulated by simian immunodeficiency virus and HIV-2 but not by HIV-1 Nef proteins. Thus, maximal protection seems to involve an as-yet-unknown mechanism that is independent of CD4 or coreceptor down-modulation. Finally, we demonstrate that superinfected primary T cells show enhanced levels of apoptosis. Accordingly, one reason that HIV-1 inhibits CD4 surface expression and superinfection is to prevent premature cell death in order to expand the period of effective virus production.