Cytogenetic and molecular characterization of the macro- and micro-inversions, which distinguish the human and the chimpanzee karyotypes - form speciation to polymorphism 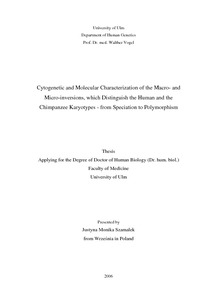 During the last 5 - 7 million years, since humans and chimpanzees shared a common ancestor, numerous cytogenetic and molecular changes have accumulated in their genomes. I characterized the human-specific pericentric inversion of chromosome 1 and the chimpanzee-specific pericentric inversion of chromosome 5. These analyses revealed that the HSA1 inversion is associated with the emergence of human-specific segmental duplications, which mediated this rearrangement. Conversely, the breakpoints of the PTR5 inversion occurred within gene-poor regions where no low copy repeats but several mutation-prone motifs were identified. Subsequently, I confirmed that the common chimpanzee and the bonobo share the same breakpoints of chimpanzee-specific pericentric inversions. Therefore these inversions predate the separation of these lineages, 0.86 - 2 Mya. I also examined if the effect of suppressed recombination within the inverted regions between human and chimpanzee is detectable in genomic sequences of these species. Contrary to the chromosomal speciation model, which presumes that genetic incompatibilities should have accumulated within the inverted regions, I found lower sequence divergence in these areas, which is in positive correlation with the present-day recombination rates in humans. Furthermore, by gene order comparison between human and chimpanzee, a genome-wide search for micro-inversions was performed. A total of 71 putative micro-inversions were identified, from which the eight largest were verified. Four such events were found to be polymorphic in chimpanzees or in humans. Thus the micro-inversion differences form an overlap from species diversity to lineage-specific divergence. Moreover, these events have potential to influence gene coding sequences. In conclusion, this study serve to create a picture of the mutational events, which by interplay with environmental factors eventually might have resulted in the phenotypic differences between humans and chimpanzees.