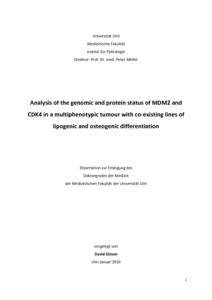 We analysed in detail a rare and complex multiphenotypic tumour over a time period of six years with four separate points of references, which represent four abdominal recurrences. Initially the tumour was a GI liposarcoma with amplifications of mouse double minute homolog 2 (MDM2) and cyclin dependant kinase 4 (CDK4). The fourth recurrence however also contained a GIII liposarcoma, high-grade extra-skeletal abdominal osteosarcoma and non-neoplastic fat, cartilage and bone. The case was studied on a protein and genomic level to establish the similarity of the multiphenotypic tumour with the preceding recurrences. Immunohistochemical (IHC) staining and fluorescent in situ hybridization (FISH) revealed a similarly high amplification of MDM2 and CDK4 for all neoplastic regions as well as a DNA damage-inducible transcript 3 gene (DDIT3) rearrangement of the osteosarcoma. A myxoid liposarcoma was excluded based on morphology and the absence of a fused in sarcoma gene (FUS) rearrangement. To construct a comparison, we undertook similar analysis of a cohort consisting of 10 lipomas, 12 liposarcomas and 10 osteosarcomas which all existed as isolated tumours. Our findings revealed that none of the lipomas showed amplifications of MDM2 or CDK4. The liposarcomas were either amplified on a genomic level or over-expressed on a protein level for MDM2 or CDK4, which concurred with the case. Only 1/10 osteosarcomas showed an amplification and over-expression of MDM2 and CDK4 which showed that the genomic profile of the high grade extra-skeletal osteosarcoma of the 4th recurrence was not typical for osteosarcomas. The genetic similarity of the osteosarcoma with the liposarcoma lead us to understand that these evolved from a mutual cellular pool. Furthermore, adding to the mutagenic complexity of the osteosarcoma, we observed a DDIT3 rearrangement through FISH analysis, which is typically found in myxoid liposarcomas. The heterogeneous, multiphenotypic nature of this tumour are what make it rare and till now, unprecedented. Four theories were composed to explain the route with which the osteosarcoma may have evolved. Due to the nearly identical genetic make-up and smooth histological transitions of neoplastic entities, our evidence suggests strongly that it mutated from the previous recurrences of the described liposarcoma. We concluded that the osteosarcoma progressed from the lipogenic neoplasm through vertical de-differentiation as opposed to horizontal differentiation. Although vertical de-differentiation is more plausible, it still contradicts fundamental cell-lineage theory.