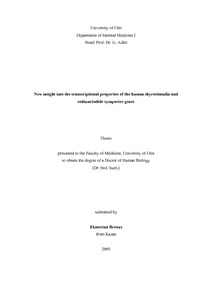 The first part of this work has focused on transcriptional regulation of the human sodium/iodide symporter (hNIS) gene by thyroid stimulating antibodies in patients with Graves’ disease (GD) and by phthalates. Because iodide uptake activity is increased in patients with GD, the interaction of the hNIS promoter and upstream enhancer (NUE) with affinity purified GD IgG was investigated. As anticipated, these IgG were found to activate hNUE in thyroid cells, acting similarly to thyroid-stimulating hormone. The effects of phthalates on thyroid function are indicated by morphological investigations, which showed that some phthalates induced thyroid hyperactivity. It was therefore thought important to determine whether phthalates modulate the transcriptional activity of the hNIS gene. As a result, three major phthalates - di-isodecyl phthalate, benzyl butyl phthalate and di-octyl phthalate - significantly increased the activity of the hNIS promoter construct in thyroid cells. In the second part of this work, transcriptional control mechanisms of the novel human hormone thyrostimulin were analysed. For the first time, the cloning of the minimal promoter of thyrostimulin A2 subunit was described. Deletional, mutational and gel shift analyses revealed several candidate regulatory elements that are essential for the regulation of the A2 gene expression. In addition, classical silencer regions upstream and downstream the A2 promoter were located. Another noteworthy feature of this gene is the presence of exonic and intronic silencer elements. Finally, thyrostimulin A2 and B5 subunit cDNAs were cloned into a bi-promoter expression vector and the resultant construct was stably transfected into 293 cells. Serum-free conditioned medium containing recombinant proteins was capable of strongly stimulating the activity of the hNIS promoter and enhancer-luciferase construct in FRTL-5 cells, thereby implicating thyrostimulin, albeit indirectly, in the established view of thyroid axis.