Molecular detection of metastases in regional lymph nodes in patients with cancer of the head of the pancreas. Clinical relevance 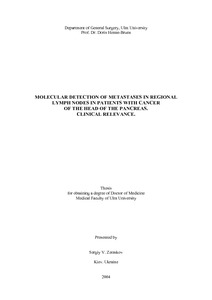 The purpose of this work was: 1. To test the efficacy of two molecular methods: Restriction Fragment Length Polymorphism Polymerase Chain Reaction (RFLP PCR) for detection of mutation in codon 12 of oncosuppressor K-ras gene and Reverse Transcription (RT) PCR for Cytokeratine20 (CK20) expression as markers for molecular detection of occult metastases (MDM) in patients with adenocarcinoma of the pancreas. 2. To analyze factors of influence and pattern of MDM appearance in distant lymph nodes in patients after extended pancreatoduodenal resection (R0 patients). 3. To analyze the influence of distant nodal MDM on clinical prognosis. Methods: The study was carried out on 28 patients. Altogether there were 531 lymph nodes histologically investigated in this study. Of these 305 lymph nodes were distant regional lymph nodes hemisected and tested for the K-ras and CK20 markers. Results: 1. Histological examination showed tumor invasion in 11,0 % distant lymph nodes. Application of molecular methods (K-ras and CK20 together) increased this index up to 25,9 %. The method of combined K-ras and CK20 detection has sensitivity 96,7 %. 2. The distant nodal MDM in patients with pancreatic cancer is a phenomenon independent from the morphological parameters of primary tumor and pN status. The most frequent site of MDM appearance in regional lymphatic system was the para-aortal lymph nodal station. 3. Among patients with MDM who were diagnosed on the basis of a concurrence of both positive K-ras and CK20 markers in the same lymph node (concordant markers), there were 4 patients with MDM in para-aortic lymph nodes (LN16). In this group there were no 2-year survivors observed and the median survival and median PFS were both equal to 13 (range, 1-18) months. This group of patients was compared to the group of 10 patients with no signs of MDM in para-aortic lymph nodes and the difference in the survival rate was considerable. The 2-year actual survival and 2-year progression free survival (PFS) in the latter group respectively was 50 % and 60 % while median survival and median PFS, respectively, were 32 (range, 1-40) and 26 ( range, 1-37) months. The data concerning clinical relevance of MDM was obtained from 14 patients. The question of MDM influence on clinical prognosis requires further investigation in larger populations of patients.