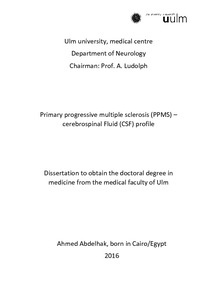 Objective The aim of this study was to report the basic cerebrospinal fluid (CSF) profile in patients with primary progressive multiple sclerosis (PPMS). Methods The results of CSF analysis from 254 patients with PPMS were collected at four university hospitals in Germany. Routine CSF parameters and different indices of intrathecal immunoglobulin synthesis were evaluated. We assessed possible correlations between the various CSF parameters and the expanded disability status scale (EDSS) both at the time of lumbar puncture and during the course of the disease. Results The median cell count and albumin concentration in the CSF did not deviate from normal values. The CSF-serum albumin-quotient (QALB) was elevated in 29.6% of the patients, while intrathecal immunoglobulin G (IgG) oligoclonal bands (OCBs) were detected in 91.1% of the patients. CSF-lactate levels as well as local IgM- and IgA-synthesis were correlated with the yearly disease progression rate, as assessed by EDSS. Conclusion We present the results of the hitherto largest and most detailed CSF biomarker profile in a cohort of 254 patients with PPMS. As reported previously, OCBs are the most sensitive marker for intrathecal IgG synthesis. CSF-lactate concentrations are positively correlated with the progression rate, which might suggest that mitochondrial dysfunction plays a relevant role in PPMS. The negative correlation between intrathecally produced IgM and IgA and disease progression may indicate their hitherto unexplored protective role.