The Influence of sex, age and psychological traits on experimental heat pain experience 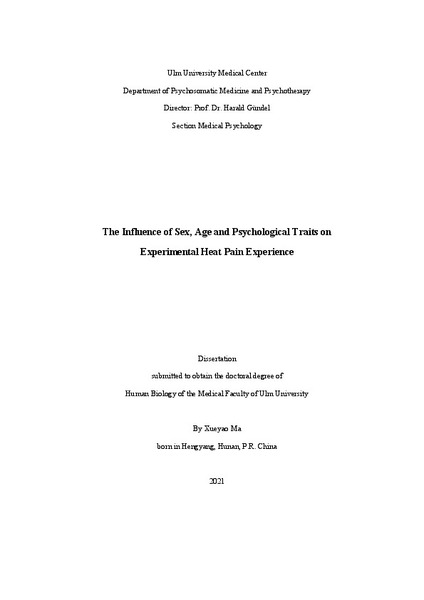 The purpose of the present dissertation was to explore the potential influence of individual differences including sex, age, and psychological traits on experimental heat pain experience. For assessing the psychological traits of participants, four questionnaires were selected, including the Neo Five-Factor Inventory, the Behavioral Inhibition System/Behavioral Activation System scales, the Emotion Regulation Questionnaire, and the Symptom Checklist-90-Revised. Regarding experimental pain elicitation, a tonic heat stimulation method was used. For pain measurement, biopotentials including electromyography (EMG), electrocardiogram (ECG), and electrodermal activity (EDA) were recorded during pain stimulations, besides, automatic recording of facial expressions of pain was applied. After extraction of biopotentials data, seven features were employed to describe the biopotential performance of pain, with three describing the variability of Electroencephalography, and four presenting the peak of EDA, the peak activity of EMG of trapezius, EMG of corrugator supercilia, and EMG of zygomaticus major, respectively. The variable “facial distance change” (FDC) representing the total facial changes of the facial features except for the change of nasal wrinkling and the variable “nasal wrinkling” (gn) representing the change of nasal wrinkling were calculated to describe the facial expressions of pain. Several remarkable findings were obtained in this study. The female is more sensitive to experimental heat pain with lower pain tolerance and behaves more obvious nasal wrinkling during pain tolerance stimulation. The elderly are less sensitive to experimental pain with higher pain thresholds, besides, they present decreased biopotential activities and fewer facial expressions during heat pain thresholds compared with their young counterparts. With respect to pain thresholds, the correlation results indicate that individuals with high Behavioral Inhibition System may be sensitive to pain with lower pain intensities, and Somatization, Obsessive-compulsive, Hostility, Phobic Anxiety, and Psychoticism are associated with pain tolerance negatively, and the regression model indicates only Positive Symptom Distress Index and Phobic Anxiety can predict pain threshold and pain tolerance with a low influence. Considering biopotentials of pain, the correlation results show that only BIS has a negative relationship with the EMG activity of zygomaticus major during the pain threshold level and Hostility can predict both lower activity of zygomaticus major and corrugator supercilii at the level of pain tolerance, and the regression results indicate that several psychological traits could explain part of the individual variance of facial EMG during pain. In terms of facial expressions of pain, only limited psychological variables are associated with the facial distance change and nasal wrinkling during pain, and the regression results present that only at pain tolerance level Hostility, Paranoid ideation, and Cognitive reappraisal can explain 15% of the total variance of facial distance change and Neuroticism and Agreeableness can predict 8% of the total variance of nasal wrinkling. The findings that several factors can influence the objective measurements of experimental pain are insightful and advantageous for the better advancement and improvement of the automated recognition accuracy of pain both under the experimental or clinical condition.