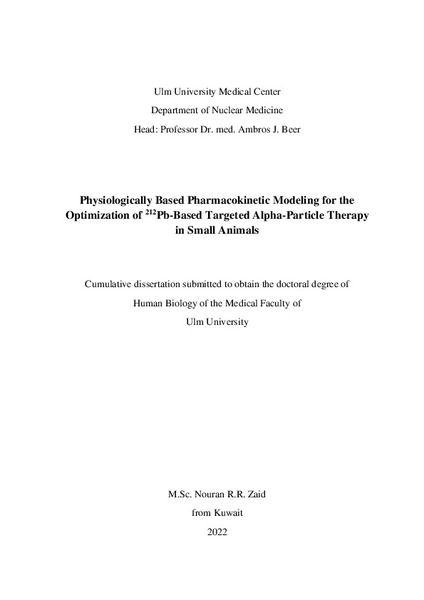 Targeted alpha particle therapy (TAT) is an effective approach for the treatment of aggressive tumors and micrometastases. The high linear energy transfer and the short range of alpha particles cause severe damage to tumor cells, while normal tissue is spared. Compared to short-lived alpha emitters, the use of in vivo alpha particle generators in TAT enables larger doses to be delivered per unit activity administered, improves the pharmacokinetics (PK) of targeting vectors and facilitates the preparation and distribution of activity to applying hospitals. However, the decay chain of the in vivo alpha particle generator should be carefully analyzed. The free alpha-emitting daughters produced by the preceding decays can enter the bloodstream and redistribute to tissues, resulting in radiation toxicity to non-target tissues. Therefore, the activity distribution should be quantified to evaluate the efficacy and safety of using in vivo alpha particle generators in TAT. Mathematical modeling is a tool that can be used to investigate the fate of the individual radioactive decay products separately and simultaneously. The goal of this thesis is to investigate the PK of the in vivo alpha particle generators 212Pb-labeled somatostatin analogs (212Pb-SSTA) and their radioactive decay products. For this goal, a whole-body physiologically-based pharmacokinetic (PBPK) model for 212Pb-SSTA was developed, in which two other developed mathematical models were integrated, the in vivo alpha particle generator model and the 212Bi-PBPK model. The complex 212Pb-SSTA-PBPK model was used to determine the optimal injected amounts leading to the highest tumor-to-kidneys ratio. First, the building block of the whole-body 212Pb-SSTA-PBPK model, that is the in vivo alpha particle generator model, was developed and implemented using modeling software tool SAAM II version 2.3 (The Epsilon Group, TEG, USA). The structure of the in vivo alpha particle generator model describes the kinetics of conjugated 212Pb and its radioactive decay products. The mathematical model consists of five compartments, namely conjugated 212Pb, conjugated and free 212Bi, free 208Tl and stable 208Pb compartments connected via physical and chemical transfer rates. Conjugated and free 212Po were not represented by individual compartments (half-life = 0.3 µs), but integrated into the calculations. The in vivo alpha particle generator model was used to determine the fraction of dissociated 212Bi-DOTAM complexes after beta decay of conjugated 212Pb by simulating a 212Bi retention study. The contribution of each conjugated and free radionuclides to the total energies released from DOTAM- and DOTA-conjugated 212Pb were calculated. Second, a 212Bi-PBPK model for rats was developed and implemented using SAAM II. The model includes relevant physiological mechanisms, such as blood flow, diffusion, and urinary excretion with parameter values from the literature. First-order kinetics are assumed to describe 212Bi interactions with red blood cells (RBC), high molecular weight plasma protein (HWPP) and intracellular biological thiols. A number of parameters of the 212Bi-PBPK model were determined using free 212Bi biokinetic data in rats after injecting 0.07 fmol of 212Bi (88.8 kBq) in blood plasma. Subsequently, absorbed dose coefficients (ADC) in the tissues were calculated. Finally, the 212Pb-SSTA-PBPK model for mice was developed and implemented using SAAM II and Simbiology/MATLAB (MATLAB R2020a, The MathWorks, Inc., USA). The 212Pb-SSTA-PBPK model includes all relevant physiological mechanisms such as blood flow, diffusion, specific and non-specific binding, internalization, recycling and excretion. A number of model parameters were estimated by fitting to biokinetic data of 212Pb-DOTAMTATE after injecting 142 kBq/nmol of 212Pb-SSTA in AR42J-bearing mice. The ADC in tissues were calculated for bound and unbound radiolabeled SSTA and all free radioactive decay products of 212Pb-SSTA. Simulations were performed for different injected amounts and activities that deposit 23 Gy in kidneys. Tumor-to-kidneys ratios and total energies absorbed in glomeruli and proximal tubules were calculated for long-lived conjugated 212Pb and its decay products and compared to that of short-lived conjugated 212Bi. The simulations using the in vivo alpha particle generator model showed that alpha emissions account for 75% of the total released energy, mainly from 212Po (72%). The simulation of the 212Bi retention study results in (16 ± 5)% of the 212Bi-DOTAM complexes dissociated after beta decay of conjugated 212Pb. The fractions of energies released by free radionuclides were 21% and 38% for DOTAM and DOTA chelators, respectively. Using the 212Bi-PBPK model, the estimated values of the uptake rates of free 212Bi by liver, bone, small intestine, bone marrow, skin and muscle were (0.86 ± 0.13), (3.85 ± 0.63), (0.27 ± 0.05), (1.44 ± 0.29), (0.04 ± 0.01) and (0.007 ± 0.007) min-1. The corresponding ADCs were 0.09, 0.03, 0.03, 0.07, 0.01 and 0.003 mGy/kBq, respectively. Kidneys have the highest ADC of 0.70 mGy/kBq. The developed 212Pb-SSTA-PBPK model showed also that kidneys received the highest ADC of 134 Gy/MBq among non-target tissues. The alpha-emitting daughter 212Po contributes more than 50% to total absorbed doses in most tissues. At the injected amounts of 212Pb-SSTA and 212Bi-SSTA leading to 23 Gy in kidneys, the optimal tumor-to-kidneys ratio is 36% higher with 212Pb-SSTA than with 212Bi-SSTA. Also, the energies absorbed in the glomeruli and proximal tubules account for 54% and 46%, respectively, of the total energy absorbed in kidneys. In conclusion, the developed whole-body 212Pb-SSTA-PBPK model for mice enables cost-effective determination of not easily accessible PK of 212Pb-SSTA and its radioactive decay products. In addition, the developed 212Pb-SSTA-PBPK model allows the evaluation of using 212Pb-based in vivo alpha particle generators in TAT. Consequently, the translation of using 212Pb-based in vivo alpha particle generators from bench to bedside can be accelerated by enabling better design of experiments and by improving the understanding of the underlying mechanisms.