Observations on spinal muscular atrophy in context of treatment with Nusinersen : a neuropsychological approach 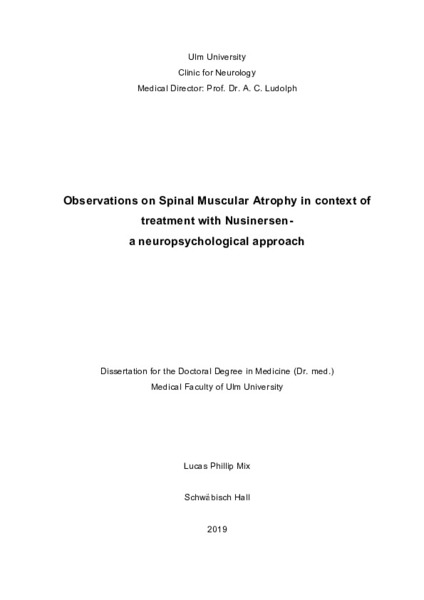 SMA (spinal muscular atrophy) is a rare and severe neurodegenerative disease, which leads to progressive muscle weakness and subsequent muscle atrophy. Time of onset, pace of progression, severity of symptoms and at last also life expectancy varies considerably. However, the onset is typically infantile. Despite the pathologies’ profound impact on development and on everyday life, findings of previous studies indicate a good QoL, as well as cognitive abilities on a level that is equal or even slightly superior to healthy individuals. Still, the evidence on both matters is scarce. The development and clinical application of the new drug Nusinersen, an ASO (antisense oligonucleotide) that has been shown to stop or slow down disease progression in new-borns and children has brought many patients with SMA to the clinics. This new situation, allows the assessment of quality of life and cognition in representative cohorts. This work set out to evaluate QoL (quality of life) as a secondary outcome measure for treatment with Nusinersen in context of a clinical application study. Furthermore, it was the aim to assess psychosocial adaptation and the cognitive profile of patients with SMA. To this end, patients were assessed neuropsychologically for their QoL, level of depressiveness, cognitive domains of memory, visuospatial abilities, executive function, verbal abilities and social cognition. The study included 26 patients under treatment at the RKU in Ulm, 16 patients under treatment at the MHH in Hanover and 4 untreated patients from the outpatient clinic of the RKU. Longitudinal evaluation (day 1, day 60 and day 182) of QoL and depressiveness under treatment with Nusinersen was carried out for the 26 patients treated at the RKU. Cognition was evaluated in a cross-sectional fashion for all 46 patients. The collective contained adult, as well as paediatric patients. These patients were matched with healthy individuals under the criteria of age, sex and years of education (mean-matching for adults; 1:1-matching for paediatric patients). There was no evidence for a significant improvement of physical function in the patients but a significant decrease of QoL over the first 182 days of treatment with Nusinersen. In this, it provides the first available evidence on this question. Conversely, in adult patients the perceived health increased significantly over this period, despite the fact that no change could be detected in the motor function. In line with literature, patients generally exhibited good levels of QoL and depressiveness, which did not differ from those found in healthy controls. It could further be shown, that an early disease onset and a low level of physical functioning were predictors for good QoL and low depressiveness (indicating a satisfactory psychosocial adaptation), which is in line with previous findings as well. The findings of this work indicate that QoL has the same determinants in patients with SMA and healthy subject with the social environment being the most influential one. Health however, played an equally small role for QoL in both groups. While the results of past studies on cognitive abilities in SMA are inconclusive, this work found no difference between patients with SMA and healthy controls in any of the tested cognitive domains. However, it was found that in adult patients with SMA, a low level of physical functioning was a predictor for better executive function. The presented findings might be interpreted in the sense that the decrease of QoL over the first 182 days of treatment with Nusinersen does merely represent a return to a baseline of QoL after transiently elevated levels of QoL due to hopes and expectations associated with the therapy. For the amelioration of perceived health under therapy, subtle motor improvements, too small to be captured by the motor scores, as well as the phenomena of autosuggestion, heterosuggestion and social desirability seem plausible. Both psychosocial adaptation and executive function were associated with low physical function and in case of psychosocial adaptation also with an early disease onset. This can be explained by the fact that adaptation to a life with few physical functions and reallocation of cognitive resources, otherwise used for motor tasks, is achieved more effectively at earlier stages of life, when (neuronal and mental) plasticity is still greater. Clinical implications of this work are that patients should be educated about the fact that, at least in the short run, enhancement of QoL is not an effect to be expected of therapy with Nusinersen. This is important to prevent wrong expectations and subsequent disappointment, which could in turn have negative effects on QoL. Furthermore, it should be noticed that among patients with SMA, those with a late onset are those, who are most likely to have a bad adaptation to their situation and develop a depressive pathology. This knowledge can help clinicians to identify those patients they should pay special attention to, regarding signs of a psychopathology.