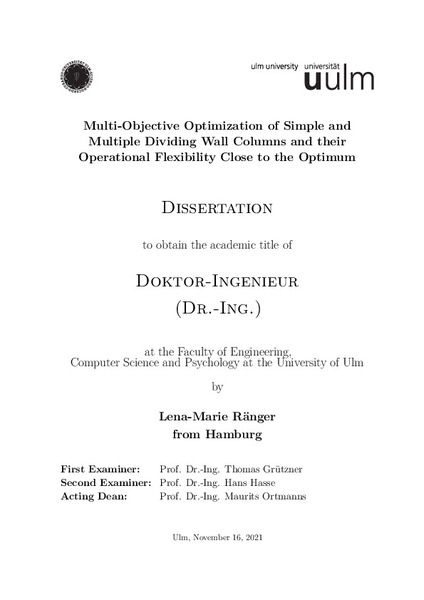 This work aims to investigate the high-dimensional optimal space of simple and multiple dividing wall columns, clarify the impact of included variables and identify when this type of intensified column is more advantageous than conventional distillation sequences. Although this knowledge is highly relevant to the understanding of these complex devices, this topic has not been sufficiently explored in the literature. In order to fill this gap this work presents theoretical calculations performed based on automated flow sheet simulations in Aspen Plus with an external optimizer. An additional objective of this contribution is to apply the findings on a flexible designed simplified multiple dividing wall column pilot plant which should be build at Ulm University. Last, the operational flexibility of the liquid and vapor splits close to the found optimum, which allows conclusions to be drawn about its robustness, is studied in detail. A new kind of multi-objective optimization procedure is introduced which includes, additionally to the total stage number N and energy demand ˙Q, also the product purities as objectives. Consequently, an a posteriori analysis of the objective space is realizable which enables the human decision maker to analyze the data for several cases without the need of a new calculation run. An in depth study on the impact of the included variables on the optimal output indicates that the ratio of product flows divided by the feed flow of the corresponding component can significantly affect the minimum energy demand of the column. Consequently, the product flows should not be assumed constant but rather be included as optimization variables. On the other hand, it is proven that the number of theoretical stages in the column sections can simply be determined with the shortcut Fenske equation. Based on the obtained optimization data a simple empirical method is presented to estimate Pareto-optimal compromises between energy demand and total stage number of dividing wall or simple distillation columns and sequences of those. This approach can also be included into a calculation to evaluate which distillation option is better suited over the whole NQ optimal range. As a general rule it is found that column sequences require a lower minimum stage number while dividing wall columns show a lower minimum energy demand. Consequently in certain regions of the optimal space dividing wall columns are better suitable and in another column sequences. The new introduced Decision Number helps to evaluate which option is more beneficial over the whole feasible operating range. The results show that the dividing wall column is superior over the direct split sequence for systems requiring significantly more stages for the low boiling components, while the benefit decreases for increasing stage requirements for the high boiling components. A reversed effect is found in comparison to the indirect split sequence. However, there is no case in which the column sequences are overall superior over the dividing wall column. Additionally, no impact of the fraction of the middle boiling component in the feed stream on the energy saving potential of dividing wall columns is observed. This refutes a widespread statement in the literature. For the multiple dividing wall column pilot plant at Ulm University it is found that high energy savings between 25 and 45% can be expected for a broad set of systems. Thus, this work makes an essential contribution to answering the question under which circumstances dividing wall columns can be used profitably. Additionally, the robustness of a dividing wall column operation close to the corresponding energetic optimum in the context of multiple steady states of the internal vapor and liquid splits is evaluated. The results show that the location of suitable vapor and liquid split ranges is not only determined by the system itself, but also by the total stage number and their allocation in the column sections. To understand this behavior an extended version of the minimum vapor (Vmin) diagram is developed witch also includes the dimension ni = Ni/Nmin,i and thus the distance to the minimum stage number of the column and column sections. This extended diagram can also be applied to estimate suited vapor and liquid split ranges in multiple dividing wall columns with finite and non-optimal stages. These estimations can be used to initialize flow-sheet simulations. Additionally, the flexibility of several systems separated in the pilot plant at Ulm University is evaluated. It is found that the vapor splits in such a column should be adjustable to values different to 0.5 in order to maintain demanded product specifications. Thus, it requires an internal tool to roughly adjust the vapor splits, like for example a pinhole sheet. Otherwise it cannot be guaranteed that the column can split a broad set of mixtures. However, if the vapor split is set to a value suited for the system, also feed stream disturbances can be handled without problems and deviation of the vapor split can be compensated by the liquid splits. All in all it can be concluded that simple and multiple dividing wall columns are a superior technique to reduce the energy demand of distillation processes, also as multi-purpose apparatus. However, a deep process understanding is required in order to design such columns in a robust way. The required knowledge is provided in this work.