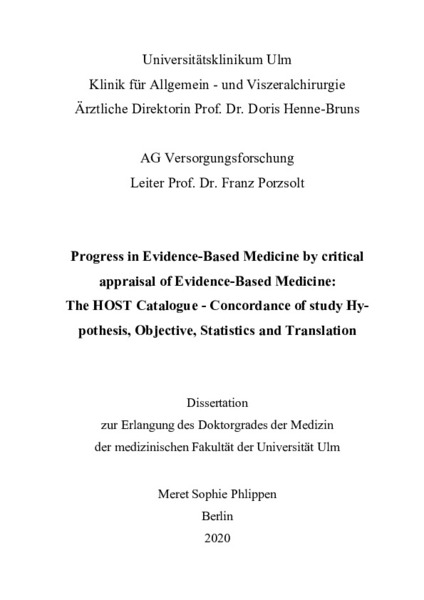 As an incidental finding of earlier scientific work, the impression was created that the described hypothesis in a clinical study was not always in concordance with the declared study objective and the statistical test applied. Therefore, we set ourselves the task to describe the concordance of the study hypothesis with the study objective and with the application of the statistical tests in 120 studies from six different disciplines. The most significant effect was seen in the considerable deviation in studies using a two-sided test and simultaneously formulating a one-sided hypothesis. This means that more patients are included in an experimental study and more patients are exposed to a human experiment. We have recorded the results of our project under the so-called HOST catalogue: we plead for the clear statement of the study Hypothesis and the study Objective, the matching application of the Statistical testing and the correct Translation of the study results. In order to make studies more ethical, we propose to ensure that the clearly stated study hypothesis is in concordance with the clearly stated study objective and in concordance with the statistical test when conducting a study.