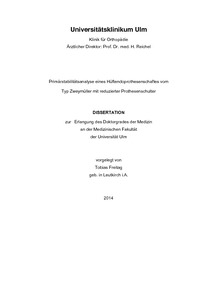 Primary stability necessitates implant-bone micromotions below 150 micrometer, otherwise bony ingrowth is negatively influenced. In this in-vitro study we investigated a modification of the Zweymüller type stem with reduced proximal shoulder in reference to primary stability. Primary stability, including reversible micromotion and irreversible migration, was assessed in a hip simulator. Micromotions were below the critical threshold for both prostheses at all measurement points. Axial reversible and irreversible micromotions were not influenced by reducing the shoulder of the prosthesis. Resistance against rotational moments was less pronounced after reduction of the shoulder without statistical significance. Reducing the shoulder of the Zweymüller type stem does not negatively influence axial but might negatively influence rotational stability. Even though, comparable results still suggest a reasonable resistance against rotational forces.