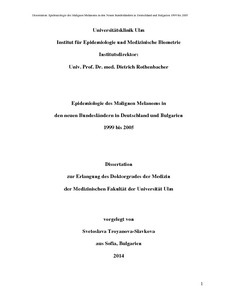 Introduction During the past years the incidence of malignant melanoma has been rising . Exposure to UV-radiation is the most important risk factor. However, variation in gender and geographical distribution indicate that also other environmental or lifestyle factors could play a role in the etiology of MM. The objective of this epidemiological study is to compare the absolute numbers and incidence rates of malignant melanoma between 1999 and 2005 in the Eastern part of Germany and Bulgaria. Material and methods Part of this work, underlying patient data are taken from the Common Cancer Registry of the New Federal States (Gemeinsames Krebsregister (GKR)) in Berlin, Germany, the largest and most comprehensive register of its kind currently in Germany. The German states of Berlin, Brandenburg, Mecklenburg-Western Pomerania, Saxony, Saxony-Anhalt and Thuringia with population there in 2008 was 16.8 million inhabitants contribute to the GKR. In Bulgaria, the information on MM has been provided by the National Bulgarian cancer registry in Sofia, which covers the Bulgarian population of about 7 million inhabitants. Results During the observation time 13 477 incident MM cases in the GKR in Germany were identified and 2259 cases in the Bulgarian cancer registry. In Germany more cases occurred in women. The numbers for Bulgaria were more ba the male gender. In Bulgaria the highest incidence was observed in the age-group 65-69 years and in Germany in the age group 75-79 years. The commonest histology in Germany was lentigo maligna and in Bulgaria nodular MM. In Germany the UICC stage I was most prevalent, while in Bulgaria UICC stage II Discussion In the German data in both sexes higher incidence rates than in Bulgaria were observed.