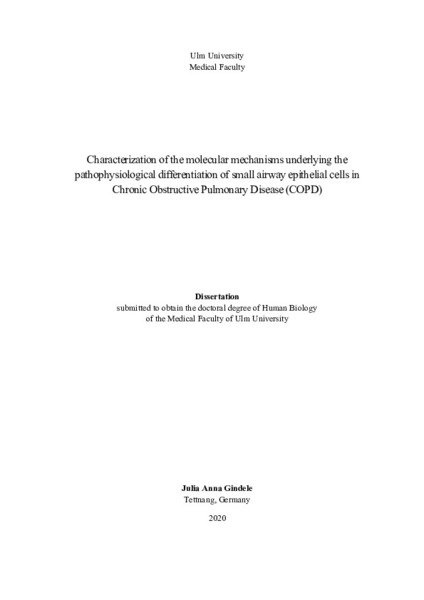 A characteristic feature of Chronic Obstructive Pulmonary Disease (COPD) is the pathological and progressive remodeling of the small airway epithelium, for which there is currently no effective therapy. To investigate the underlying pathophysiological mechanisms a novel in vitro model was established that allows the cultivation of primary human small airway epithelial cells (SAEC) at the air-liquid interface (ALI). To show, whether the established SAEC ALI culture reflects the human situation in vivo, functional, morphological and transcriptional features were assessed by measuring transepithelial electrical resistance (TEER) and ciliary beating, evaluating histological and electron microscopic images and performing a detailed RNA sequencing analysis. The new protocol allows the cultivation of cells from healthy individuals and cells from COPD donors, the latter showing some conserved characteristics, such as a less ciliated and more secretory epithelium. A classification analysis based on the gene signature of healthy and COPD-derived ALI cultures with in vivo samples of small airway epithelial brushes showed a high classification power and thus a high predictability of health status. Our data demonstrate that disease-specific properties are conserved in COPD-derived small airway basal cells. To model disease-relevant changes in the small airways, SAEC ALI cultures were exposed to different COPD-related stimuli. The basolateral administration of liquid cigarette smoke extract (CSE) during SAEC differentiation resulted in a reduction in TEER, indicating an impaired epithelial barrier formation, which is characteristic for COPD airways. Furthermore, our findings suggest that CSE-mediated oxidative stress enhances epidermal growth factor receptor (EGFR) signaling via downstream modulators, leading to the induction of COPD-relevant features, such as basal cell hyperplasia and goblet cell metaplasia. This was evaluated by histological and electron microscopic analysis as well as the detection of specific proteins. EGFR inhibition by the tyrosine kinase inhibitor (TKI) gefitinib was sufficient to prevent the pathological effects. These results suggest a therapeutic benefit of EGFR inhibitors in COPD by reducing airway obstruction and mucus hypersecretion. However, therapeutic inhibition of EGFR signal transduction remains a challenge, as it requires a balanced approach to enable normal tissue homeostasis while preventing excessive signaling that causes pathological features. To model the pathological alterations of the small airway epithelium in a more physiological setting, SAEC ALI cultures were exposed to whole cigarette smoke (CS). In contrast to liquid CSE, whole CS contains not only soluble but also volatile components of smoke. CS exposure during SAEC differentiation led to a number of pathological changes, such as impaired barrier function, squamous differentiation, goblet cell hyperplasia and a reduction of club and ciliated cells. These aspects were analyzed by means of TEER measurements, histological assessments, flow cytometry, cilia beat measurements and transcriptional evaluations including a detailed RNA sequencing analysis. Pathway analysis revealed the deregulation of important pathways associated with smoking, such as nuclear factor erythroid 2–related factor 2 (Nrf2)-mediated oxidative stress, xenobiotic metabolism and aryl hydrocarbon receptor (AHR) signaling.The CS-induced remodeling of the small airway epithelium in vitro closely resembles the epithelium of smokers in vivo. This was evaluated by comparative transcriptomic analysis of SAEC ALI cultures and human small airway epithelial brushes. To investigate acute effects of CS on the small airway epithelium, SAEC ALI cultures were exposed to CS on four consecutive days. The response to acute CS exposure included a decline in barrier integrity, a shift of cellular markers on RNA level indicating a remodeling towards Mucin 5 AC (MUC5AC) positive cells, and the induction of oxidative stress and inflammatory processes. This was shown by analysis of TEER, transcriptional evaluation of cell markers, analysis of transcripts associated with tight junctions and oxidative stress, and measurement of secreted interleukin-8 (IL-8). The newly established model of acute CS exposure reflects many smoke-induced epithelial changes that can also be observed in the human airways. In addition, a comprehensive single cell RNA sequencing was performed, which will be published separately. An important aim of this work was to investigate whether CS-induced changes of the small airway epithelium can be prevented pharmacologically. Therefore, two drugs approved for the treatment of COPD, olodaterol and roflumilast, were tested for their efficacy in preventing CS-mediated SAEC remodeling. Neither olodaterol nor roflumilast or a combination of both drugs was able to prevent the CS-induced decrease in barrier integrity, improve ciliary function or show leukocyte-independent anti-inflammatory effects. The interaction with immune cells, which is missing in the present model, could be of great importance for full efficacy. Furthermore, multiple substances, which were described to have beneficial effects on tight junctions, were tested. Among those were reactive oxygen species (ROS) scavengers, such as N-acetyl cysteine (NAC) and trolox. However, none of the tested compounds could prevent the reduction of TEER after CS exposure. Taken together, important aspects of the pathological remodeling of the small airway epithelium could be modeled in vitro. The novel SAEC ALI model reflects CS-induced processes and may help to identify and test new therapeutic approaches to restore the impaired epithelial repair mechanisms in COPD.