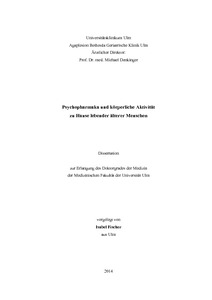 Background: Physical activity is the key for independancy and quality of life of older people (>65 years). In the last two decades, the prescription rates for psychotropic drugs among people >65 years increased. The association between physical activity and centrally acting drugs has not been well studied. Methods: Cross-sectional analysis of the observational cohort study ActiFE-Ulm (Activity and Function of the Elderly in Ulm) study from March 2009 to April 2010. Associations of physical activity and psychotropic drugs were analysed using multiple linear regression models and accounting for potential confounders, including possible indications for medications given. The assessment of physical activity was done using a high standard accelerometer-based device (uniaxial movement sensor, called activ-PAL (PAL Technologies Ltd., Glasgow, UK). To assess drugs and medications the barcode of the drugs was scanned. Results: The average daily activity of people that were prescribed centrally active drugs was significantly less than in those without. There was a significant association between physical activity and antidepressants, anticonvulsants, antipsychotics and opioids. In the multiple linear regression most important predictors of physical activity were physical function, quality of life, age, number of daily drugs and psychotropic drugs, especially antidepressants. Antidepressants were especially related to lower activity counts in people without existing symptoms of depression as compared to those with overt symptoms according to Hospital Anxiety and Depressions Scale – depression subdomain. Discussion: Because of the significance of physical activity for older people the prescription of drugs, especially antidepressants in older people without existing depressive symptoms, should be checked critically.