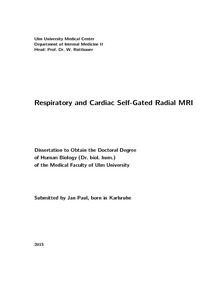 Motion in cardiac Magnetic Resonance Imaging (MRI) is a major challenge, as it results in artifacts like image blurring if not compensated for. Respiratory motion of the heart can be addressed by acquisitions during breath-hold for scan times shorter than 10–15 seconds. When longer scans are required, only data from end-expiration is used. Determination of the respiratory position is typically achieved via interleaved Respiratory Navigator (RNAV) measurements. Self-Gating (SG) is an alternative method for generating a respiration signal, overcoming some of the challenges associated with the traditional method. Measurement of motion velocities during the heartbeat via Tissue Phase Mapping (TPM) MRI intrinsically requires long acquisition times and thus necessitates consideration of respiratory motion. The heartbeat itself also has to be considered to achieve time-resolved cine movies of the beating heart. SG can also be applied for cardiac synchronization as an alternative to the traditional method of Electrocardiogram (ECG)-based gating. Furthermore, cardiac SG can be extended to be able to resolve non-uniform cardiac motion, e.g. in case of arrhythmia. In this thesis, image-based SG was shown to yield good breathing information and image quality over a variety of sequence parameters and in combination with TPM acquisitions. For cardiac synchronization, SG signals could also be extracted successfully. Additionally, it was shown that the standard method of cardiac synchronization led to deteriorated images in case of arrhythmia. SG was successfully extended to Non-Uniform SG (nuSG) to be able to handle non-uniform motion, thus combining the advantages of good Signal to Noise Ratio (SNR) (as in gated cine imaging) and the temporal definition of real-time imaging (showing each - possibly irregular - motion cycle individually rather than an average cycle).