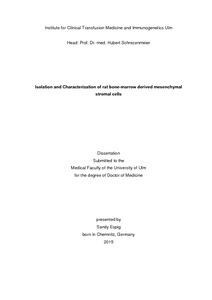 Since the beginning of the last century stem cells got into the focus of interest because of their ability of self-renew through cell division and their differentiation potential to reconstitute cells, tissues and organs. In this thesis, MSCs of the bone marrow from rats were investigated to establish standard methods for the laboratory for the isolation and optimal cultivation conditions to expand the cells. Furthermore the MSCs were characterized by means of their differentiation potential and the antigen surface expression. It could be shown, that the MSCs could be obtained successfully from bone marrow of the rats. The cells were cultured in culture flasks. For the expansion different media were tested. The optimal medium seems to be alpha-MEM with FCS as supplement at a concentration of 15 %. Expansion of the cells in these medium was most effective, the long-term expansion could be done successfully.Cultures with platelet lysate as supplement seemed a phenotype more comparable to the human mesenchymal stromal cells but with lower expansion rates. Furthermore, the effects of hPDGFAA/AB/BB (human platelet-derived growth factor type AA or AB or BB), TGF-beta1 (transforming growth factor beta1) and hFGF (human fibroblast growth factor) were investigated with proliferation assays. Most important for the proliferation seems to be hPDGF-BB, whereas the inhibitory influence of hFGF and especially TGF-beta1 was fewer.The rat mesenchymal stromal cells could be differentiated into osteoblasts, adiopocytes and chondroblasts using special media compositions. Also the surface antigen expression of rat mesenchymal stromal cells with flow cytometric analysis was in agreement with the known profile of mesenchymal stromal cells. Overall we were able to establish a protocol for isolation and expansion of rat bone marrow-derived mesenchymal stromal cells. Rat bone marrow-derived mesenchymal stromal cells are now available for preclinical trials.