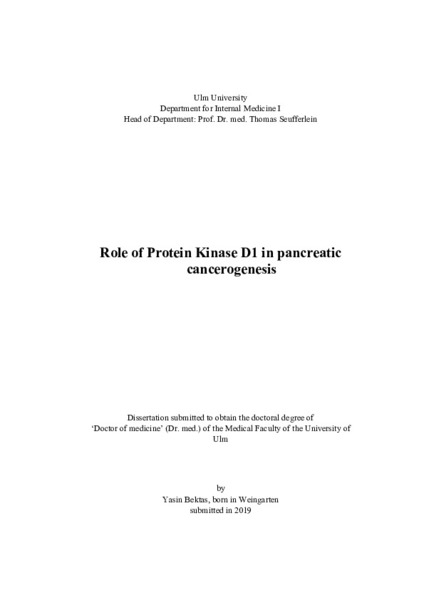 The aim of this study was to characterize the effect of Protein Kinase D1 (PKD1) loss in an oncogenic KRASG12D-driven genetic mouse model of pancreatic cancer in vivo. We evaluated three mouse lines (p48-KRASG12D, p48-KRASG12D-PKD1−/− and p48-PKD1−/−) for cancer progression over a period of one year and detected a significant reduction of overall survival in p48-KRASG12D-PKD1−/− mice compared to control littermates. We detected a significant increase in progressive Pancreatic intraepithelial neoplasias (PanIN) and collagen deposit development at 2, 5, and 9 months of analysis. We showed that p48-KRASG12D-PKD1−/− mice at the age of 5 month developed early precursor PanIN lesion, while aged-matched controls p48-KRASG12D and p48 -PKD1−/− mice had no sign of precursor PanIN lesion. In addition, we firmly demonstrated that the pancreas cancer development is associated with an increase in desmoplastic reaction (collagen deposit) and leucocyte infiltration. However, the molecular mechanism of PKD1 role in stromal tissue remains unclear. Here, we have demonstrated that PKD1-deficiency accelerates tumor development in an oncogenic KRAS mouse model (p48-KRASG12D-PKD1−/−) in vivo. Taken together, our data suggest that PKD1 has a tumor supressing function in Pancreatic ductal adenocarcinoma (PDAC), in particular at early disease stages. PKD1 loss in an oncogenic KRAS background results in a significantly earlier and faster initiation of Acinar-to-ductal metaplasias (ADMs) and PanINs. These PKD1-deficient tumors showed an increased inflammatory reaction and accelerated infiltration of leucocytes that accelerates cancer progression. The key immune cell populations that we detected in PDAC were macrophages and T-lymphocytes. Overall, our data demonstrated that PKD1 plays an essential role in pancreatic cancer progression in vivo.