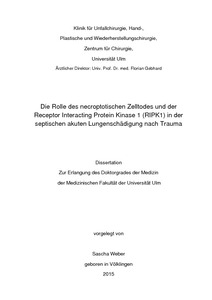 RIPK1-dependent necroptosis has been shown to be involved in the release of danger signals during sepsis. In this context, systemic knockout or silencing of RIPK1 proofed to be detrimental due to increased apoptosis. However, the pathogenetic and therapeutic value of modulating local RIPK1 activity in the lung still remains elusive. Thus, we hypothesized that in vivo silencing of multifunctional adaptor protein RIPK1 would ameliorate trauma induced septic ALI. Additionally lung epithelial cells (MLE12) were treated with TNF-alpha to investigate the in vitro effects of RIPK1 silencing. Blunt chest trauma was induced by a single blast wave in male C57Bl/6 mice (n = 5 - 8/group). RIPK1-siRNA or scrambled RNA (control) was delivered 24 hrs before and 12 hrs after trauma. Polymicrobial sepsis was induced by cecal ligation and puncture (CLP) 24 hrs after chest trauma. Inflammatory cytokine levels in lung, bronchoalveolary lavage fluid (BALF) and plasma were markedly increased at 24 hrs following ALI but were substantially reduced in response to RIPK1-silencing. At 12 and 24 hrs after CLP BALF total protein was substantially increased during ALI and was not reduced following RIPK1-siRNA delivery. Lung histology (H&E sections) showed indices of ALI, which were not ameliorated by the administration of siRNA to the lungs. Interestingly, RIPK1 silencing in lung epithelial cells did not increase lung apoptosis as evidenced by TUNEL staining of lung sections. In vitro, lung epithelial cells (MLE12) showed no signs of TNF-alpha induced cell death other than apoptosis. Here, silencing of RIPK1 did not ameliorate TNF-alpha induced release of inflammatory cytokines. Taken together, these data indicate that RIPK1 is pathogenetically involved in the inflammatory signaling cascade in trauma induced septic ALI. Silencing of RIPK1 using siRNA in vivo might be of additional therapeutic value in antiapoptotic ALI treatment strategies.