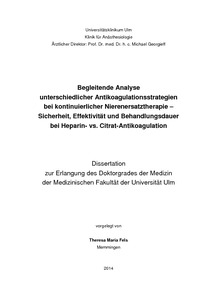 Regional citrate anticoagulation (RCA) is being increasingly used during continuous renal replacement therapy (CRRT) in intensive care units as an alternative to systemic heparin anticoagulation. However, RCA is still considered a complex intervention, possibly leading to confusion and pitfalls in everyday practice. We therefore tested retrospectively if the introduction of RCA as a new anticoagulation strategy for CRRT was feasible and had not negatively impacted efficacy, safety, metabolic stability, filter lifetime, and cost-effectiveness compared to well-established systemic heparin. This study was performed on a non-cardiac surgical and trauma intensive care unit (ICU) in a university hospital. All charts of patients receiving one of the CRRT techniques from May 2006 to April 2010 were reviewed. The first 60 consecutive patients receiving CRRT with regional citrate anticoagulation after its implementation in February 2008 were included in the study. The last 50 consecutive patients with systemic heparin anticoagulation therapy, treated immediately before the introduction of RCA, were used as a historic control group. Both treatment modalities were effective in terms of uraemia control. Patients in the citrate group presented with significantly higher pH levels, lower ionized calcium levels, and higher sodium levels compared with the heparin treated group, however, without notable adverse clinical events. Interestingly, mean circuit lifetime was significantly longer in the citrate group. Both treatment modalities were cost-effective. Our results suggest that the implementation of regional citrate anticoagulation was safe and effective. Due to the retrospective design of the study and inherent limitations therein concerning several baseline parameters, i.e. different filters, modes of dialysis, and flow parameters not having been standardized, we were unable to draw a causative effect relationship. Nonetheless, our results warrant further study.