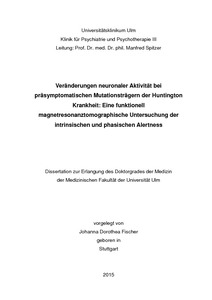 Previous neuroimaging studies have shown subclinical changes of brain function in clinical presymptomatic carriers of the Huntington’s disease gene mutation (preHD). While they have addressed more complex cognitive tasks, this study investigated basic aspects of attentional processing during a task of low cognitive demand. Functional magnetic resonance imaging (functional MRI) with uni- and multivariate statistical techniques was used to detect changes in both regional brain activation and functional network connectivity in preHD individuals (n=18) compared to healthy controls (n=18). During terms of phasic alertness preHD near to the estimated onset of clinical symptoms (preHDnear) showed lower activation of right frontostriatal regions when compared to controls. Furthermore there was decreased striatal activation found in this preHD subgroup when compared to those far from the estimated symptom onset. We also found significant correlations (p<0.05) between activation in the right putamen, task performance and proximity to the clinical symptom onset. In addition, preHDnear showed lower functional connectivity of motor regions when compared to the other subgroups. Voxel-based morphometry analyses of structural MRI data detected decreased grey matter volume in the medial frontal gyrus (BA 10) in preHD when compared to controls, but there was no spatial correspondancy to our functional findings. Our data suggest that presymptomatic carriers of the HD gene mutation show focal changes of corticostriatal activation and motor cortex connectivity while maintaining performance during an alertness task with low cognitive demand. But these findings can only be observed in those preHD with closer proximity to the clinical symptom onset, while those far from onset show intact brain activity. This suggests that hypoactivity of right frontostriatal regions alone is not sufficient to explain other brain activation and performance differences found in previous studies.