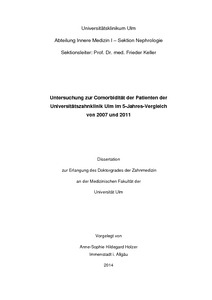 Objectives: Dental therapeutic options are becoming increasingly complex and elaborate, thereby heightening the risk of incidents and emergencies, especially in high-risk patients, which led to the concern of the existence of a correlated increase in medically compromised patients in a dental office. Methods: The anamnesis questionnaires of all newly admitted patients of the University Dental Clinic of Ulm between the 01st Jan 2007 and 30th Jun 2007 have been compared with the questionnaires obtained between the 01st Jan 2011 and 30th Jun 2011. Following a drop-out of 716 cases in 2007 a total of 988 questionnaires entered the survey. 508 questionnaires were unusable in 2011, leading to a total of 903 valid samples entering this study. The great drop-out is primarily a result of an insufficient or erroneous completion of the questionnaires through patients. Results: There has been a significant increase of morbid patients. The share of patients suffering from at least one of the examined ailments has risen from 31.1 % in sample period 2007 to 38.1 % in sample period 2011. The strongest increase manifested itself in prevalence of hypertension from 13.7 % to 18.2 %, in cancer prevalence from 4.2 % to 7.3 % and in patients with allergic dispositions from 26.9 % to 33.0 %. The variation in the remaining examined diseases has been insignificant within the last five years. In addition, a significant growth has been recorded in patients who are on regular medication. The proportion of patients on medication increased from 38.3 % in sample period 2007 to 43.3 % in sample period 2011. The most distinct growth took place in the area of antihypertensives. Conclusion The number of medically compromised and permanently medicated dental patients is increasing. Therefore, for a successful treatment without complications in a dental clinic, the focus should be increased on a detailed medical history as well as deepening the knowledge in pharmacological and general medicine.