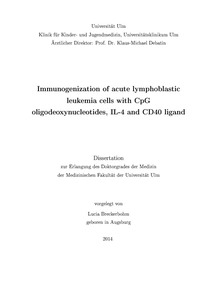 B cell precursor acute lymphoblastic leukemias (BCP-ALL) represent the most common childhood malignancy. Aim of this study was to investigate the effect of CpG-B, IL-4 and CD40 ligand (CD40L) on the immunogenicity of BCP-ALL cells. We treated BCP-ALL cell lines or patient-derived BCP-ALL cells previously expanded in NOD/SCID mice in an in-vitro culture model. We analyzed surface molecule expression and the stimulating effect of the treated BCP-ALL cells on T cells. Methods were flow cytometry, CFSE proliferation assays, cytometric bead array, rtPCR and chromium release cytotoxicity assays. Combination of CpG-B, IL-4 and CD40L by far exceeded the effect of CpG alone, e.g. in upregulation of surface molecules (CD40, CD54, MHC class I and II). Combination stimulated BCP-ALL cells were able to induce significantly higher proliferation in human allogeneic PBMC than CpG~B stimulated cells. We could show that stimulated BCP-ALL cells secrete TNF-alpha and IL-12, hence creating an immunogenic milieu. RTPCR pointed to an additional effect of CpG-B with IL-4 and CD40L, because of an increased TLR9 mRNA expression after stimulation with CD40L and IL-4. The triple combination proved to be significantly more effective in inducing anti-leukemic CTL. Importantly, such CTL expressed specific antileukemic cytotoxicity not only against treated but also against untreated BCP-ALL cells. We tested our findings in an autologous setting and observed the same tendency with a lower level. Our results demonstrate a higher efficacy of the triple combination CpB-B with IL-4 and CD40L than CpG alone in increasing immunogenicity of BCP-ALL cells. Furthermore, we could raise effective allogeneic and autologous anti-B cell leukemia CTL against untouched BCP-ALL cells. We conclude that the immunogenic cocktail may be an efficient tool to overcome poor recognition of BCP-ALL cells by immune cells in vitro.