A balanced expression of TET1 is important for normal hematopoiesis 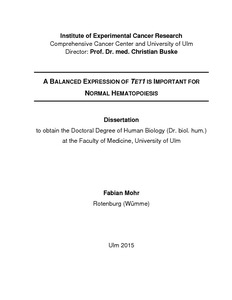 In this thesis we could show that depletion of TET1 decreases the hematopoietic stem cell pool using a knockout model. In contrast, cells with Tet1 depletion derived from the knockout mouse or induced by shRNAs showed an increase in clonogenic potential and proliferation in vitro. Depletion of TET1 could further propagate clonogenic multipotent progenitor cells in vivo and could outcompete control cells in the murine bone marrow transplantation model up to long-term engraftment. Future work regarding the synergy of weak oncogenes such as PML-RARalpha or Inv(16)/t(16;16)/CBFbeta-MYH11, with depletion of TET1 will enable us to further understand the potential tumor suppressor function observed in this thesis. Further this thesis provides evidence that genes involved in leukemogenesis do not necessarily have to be mutated in order to disrupt their function. Down-regulation of TET1 could be observed in the majority of analyzed AML patients, which correlated with inferior prognostic value regarding disease-free and overall survival. How expression of TET1 is regulated under normal conditions and in leukemia will proof useful to identify targets to circumvent or reestablish the loss of TET1 tumor suppressor activity.