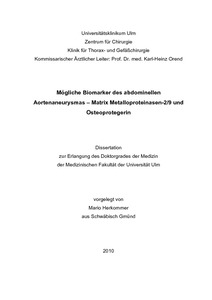 Background: Matrix Metalloproteinases (MMPs)-2/9 and Osteoprotegerin (OPG) are considered key enzymes in the pathogenesis of the abdominal aortic aneurysm (AAA), with elevated levels in diseased aorta and patient sera. The goal of the study was to find out if there is evidence that these biomarkers are suitable for risk assessment and follow up after aneurysm repair. Furthermore no data exists on the effect of statins on serum activity of MMP-2/9 and OPG. Methods: In 63 patients undergoing elective aneurysm repair serum levels of MMP-2/9 and OPG were measured on the day before and seven days after surgery using an enzyme immunoassay. Levels were correlated to aneurysm diameter, time of sampling and statin therapy. Also, tissue samples of diseased aorta were tested for immunohistochemical features. Results: There was no significant correlation between serum activity and AAA diameter in patients with infrarenal abdominal aortic aneurysm. On day seven after surgery there was a significant increase of OPG serum activitiy, while there was no significant change of MMP-2/9 levels. Immunohistochemical staining with antibodies against OPG and MMP-2/9 each showed positive reactions in the cytoplasm of medial and adventitial inflammatory cells. There was no significant difference between the statin treated and untreated group in the activity of circulating levels of MMP-2/9 and OPG. Conclusion: There is consistent evidence that MMP-2/9 and OPG are not suitable markers for risk stratification in AAA patients and follow up after aneurysm repair. Furthemore, serum activities of MMP-2/9 and OPG are not correlated to statin therapy. The lack of impact on the serum activity may be due to a lack of release of MMP-2/9 and OPG from the tissue to the plasmatic compartiment. Hence further investigations on the effect of statins and the exact origin of MMP-2/9 and OPG in aneurysmal aortic tissue are needed.