A diagnostic algorithm to distinguish desmoplastic from spindle cell melanoma 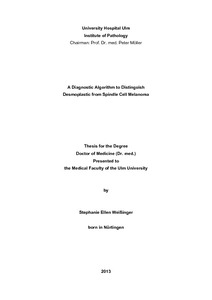