Characterizing the role of TET3 in acute myeloid leukemia 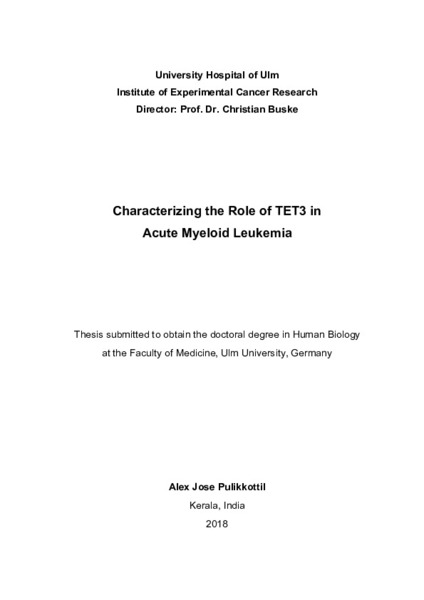 Aberrant gene regulation is a characteristic feature of acute myeloid leukemia (AML). Recently it is known that the abnormal DNA methylation of AML cells can directly affect the complex regulation of transcription and drive the disease (Ehrlich, 2002). There are a plethora of studies suggesting that the active DNA demethylation also plays a significant role in gene expression in AML patients (Jeschke et al., 2016; Ko et al., 2015b). 5-hydroxylmethycytosine (5hmC) DNA epigenetic mark have been found present at promoters, gene body and enhancers. 5hmC levels at promoters and genebody correlated positively with the level of expression (Song et al., 2011) and also known to play an important role in gene silencing (Wu et al., 2011). Concomitantly, 5hmC levels and patterns were noted to be strongly dysregulated in AML cells.The reasons for distorted 5hmC pattern and how these changes affect the gene expression of AML cells is still poorly known. 5hmC marks in the genome are majorly regulated by the only known dioxygenases TET family of protein namely TET1, TET2, and TET3. Unlike TET1 and TET2, TET3 is not found mutated or translocated in AML. There has not been much attention in dissecting the functional role of TET3 and its association with 5hmC marks in AML. In this study, we have dissected the functional relevance of TET3 and its association with 5hmC marks and gene regulation in AML cells. By performing qRT-PCR analysis, we showed that the TET3 is higher expressed in murine HSCs and human HSPCs. In AML patients, we found a broad range of TET3 mRNA expression and the AML patients exhibited aberrantly high expression of TET3 compared to the normal counterparts. Our lentiviral knockdown and overexpression studies proved the role of high TET3 expression in maintaining the growth of AML cells. We have proved that the depletion of TET3 perturbs the proliferation and clonogenicity of AML cells in vitro. Furthermore, TET3 knockdown reduced the leukemic engraftment of the AML cells in humanized mouse model, substantiating the important role of high TET3 levels in leukemic growth. Histopathology studies on the mice showed absence or reduced infiltration of AML blast cells in different organs of mice transplanted with shRNA-expressing AML cells. Constitutive overexpression of wild-type TET3 as well as a TET3 mutant lacking DNA binding CXXC domain in human AML cell lines further enhanced their proliferation and clonogenicity suggesting that the growth associated function of TET3 expression in AML majorly depends on its catalytic function. In contrast, shRNA mediated knockdown of TET3 in human cord blood-derived normal HSPCs inhibited the myeloid cells growth by inducing apoptosis suggesting that the balanced TET3 expression is important in normal hematopoiesis. TET3 depletion in AML cells resulted in the reduction of the global 5hmC level. In parallel, differentially regulated genes (DEGs) were involved in cancer-related biological pathways and enriched for LSC and HSC gene signatures. Moreover, the changes in the gene expression in TET3 depleted AML cells showed significant changes in the 5hmC levels on their promoter and gene body. We have analyzed the gene expression profile of AML patients based on TET3 expression levels. The genes positively correlated with high TET3 expression in AML patients significantly involved in cancer pathways suggesting that higher levels of TET3 could be important in maintaining the leukemic progression in patients. Strikingly we also found that TET3 can block the expression of immune-related gene expression which could also play a significant role in HSC biology and tumor progression. Collectively these results indicated that high TET3 expression could facilitate the leukemic transcriptional program and tumor-associated pathways by establishing the 5hmC marks on the corresponding genes via its catalytic function. Thus, our data indicate that the ordered expression levels of TET3 are necessary for healthy human HSC proliferation and differentiation. The growth and engraftment potential of AML cells depend on high TET3 expression levels.