Functional analysis of Desmoplakin during postnatal development of the hippocampus 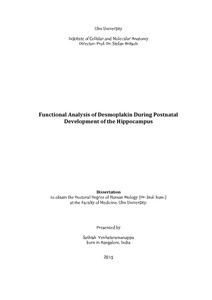 The hippocampus plays a pivotal role in learning and memory behavior. The hippocampus, in particular the dentate gyrus, is one of two locations with neurogenesis continuing in the adult brain. Bcl11b/CTIP2, a Krueppel-like zinc finger transcription factor is expressed in postmitotic granule cells of the dentate gyrus early on during development throughout adulthood. Loss of Bcl11b expression results in hypoplastic dentate gyrus caused by reduced progenitor cell proliferation as well as an arrest of neuronal differentiation leading to impaired learning and memory behavior. Desmoplakin, being one of the downstream targets of Bcl11b, overlaps with the expression of Bcl11b in granule cells of the dentate gyrus. The conditional mutagenesis of Desmoplakin gene demonstrates a similar but weaker phenotype compared to Bcl11b mutants. Moreover re-introducing Desmoplakin cDNA by ex-utero electroporation followed slice culture, into Bcl11b mutants rescues impaired neurogenesis, suggesting Desmoplakin to be an essential downstream effector of Bcl11b in hippocampal development. Collectively these results indicate that Desmoplakin has an essential role in the development of dentate gyrus.