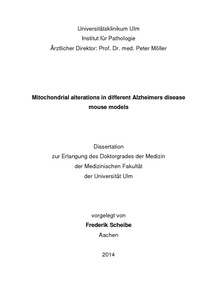 The deposition of the amyloid ß-peptide (Aß) in the brain is one of thee hallmarks of Alzheimer’ s disease (AD). It is not yet clear whether Aß always leads to similar changes or whether it induces different features of neurodegeneration in relation to its intra- and/or extracellular localization or to its intracellular trafficking routes. To address this question, we have analyzed two transgenic mouse models: APP48 and APP23 mice. The APP48 mouse expresses Aß1-42 with a signal sequence iin neurons. These animals produce intracellular Aß independent of amylloid precursor protein (APP) but do not develop extracellular Aß plaques. The APP23 mouse overexpresses human APP with the Swedish mutation (KM670/671NL) in neurons and produces APP-derived extracellular Aß plaques and intracellular Aß aggregates. Tracing of commissural neurons in layer III of the frontocentral cortex with the DiI tracer revealed no morphological signs of dendritic degeneration in APP48 mice compared to littermate controls. In contrast, the dendritic tree of highly ramified commissural frontocentral neurons was altered in 15-month-old APP23 mice. The density of asymmetric synapses in the frontocentral cortex was reduced in 3- and 15-month-old APP23 but not in 3- and 18-month-old APP48 mice. Frontocentral neurons of 18-month-old APP48 mice showed an increased proportion of altered mitochondria in the soma compared to wild type and APP23 mice. Aß was often seen in the membrane of neuronal mitochondria in APP48 mice at the ultrastructural level. These results indicate that APP-independent intracellular Aß accumulation in APP48 mice is not associated with dendritic and neuritic degeneration but with mitochondrial alterations whereas APP-derived extra- and intracellular Aß pathology in APP23 mice is linked to dendrite degeneration and synapse loss independent of obvious mitochondrial alterations. Thus, Aß aggregates in APP23 and APP48 mice induce neurodegeneration presumably by different mechanisms and APP-related production of Aß may, thereby, play a role for the degeneration of neurites and synapses.