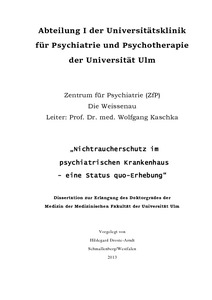 Within the present study "Non-smoker protection in a psychiatric hospital - a status-quo survey" features and intentional tendencies of patients and staff of all kind of wards of the psychiatric hospital "The Weissenau" were collected via a specific survey on smoking issues. The data have been analyzed according to different socio-demographic aspects, varying response behaviours of patients vs staff and smokers vs non-smokers. In addition gender-specific differences have also been analyzed according to statistical significance. As an overall result increased satisfaction has been found with the "status quo" of specific rooms for smokers. Sporadically a wish for enlargement of these facilities appeared. The high importance of smoking for establishing personal contacts has been emphasized as well as the aspect of calming down during hospitalization. As an important result for the long-term implementation of a smoke-free hospital a frequent wish for smoking dehabituation and corresponding support occurred independent of gender, status (patient/staff) and degree of nicotine dependence. The study represents a first step within a continuous change process regarding the mindset related to smoking or smoking dehabituation in the "Weissenau" hospital.