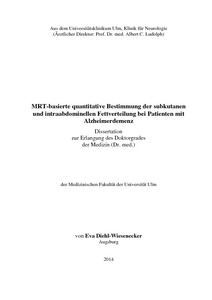 Background Obesity and increased adiposity, as measured waist circumference, have been associated with increased risk of Alzheimer"s disease (AD). Visceral and subcutaneous adipose tissue have different metabolic characteristics, and could be differentially associated with AD. Objectives To measure regional fat distribution in AD patients in a case-control study by whole-body magnetic resonance imaging (MRI) to analyze the association between fat distribution, stage of the disease, and chemical markers (adipocytokines). Methods Thirty patients with mild to moderate AD (age: 71.8 ± 5.4 years, Mini Mental State Examination: 22.1 ± 6.8) were examined by whole-body MRI (1.5 T) in comparison to 30 non-cognitively impaired age- and gender-matched study participants. Volumes of total, subcutaneous and visceral body fat tissue were determined by Automatic Tissue Labelling A,nalysis Software (ATLAS). Patients were assessed by a clinical interview. Levels of fat-specific hormones such as leptin, ghrelin and adiponectin were determined in serum. beta amyloid and tau protein levels were mesuread in cerebrospinal fluid (CSF). Results We did not observe significant differences in fat distribution between patients and controls, although there was a trend for higher visceral fat tissue in patients. Female AD patients displayed a lower subcutaneous to visceral adipose tissue, but this was not observed in males. MMSE and DAD scores were not correlated with fat distribution in our study, Leptin levels were correlated with CSF beta-amyloid in female, but not in male AD patients. Conclusions Fat distribution is altered in female, but not male AD patients, and might be correlated with CSF beta amyloid. Larger studies are required to confirm this gender difference in fat distribution during AD.