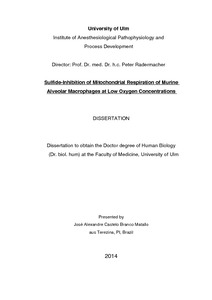 Our aim was to study the ability of an immortalized cell line (AMJ2-C11) to sustain aerobic cell respiration at decreasing oxygen concentrations under continuous sulfide exposure. We assumed that the rate of elimination of sulfide through the pathway linked to the mitochondrial respiratory chain and therefore operating under aerobic conditions, should decrease with limiting oxygen concentrations. Thus, sulfide´s inhibition of cellular respiration would occur faster under continuous sulfide exposure when the oxygen concentration is in the very low range. The cells were studied in two different metabolic states, namely under normal physiologic respiration (1) and after uncoupling of mitochondrial respiration (2). Oxygen concentration was controlled by means of a titration-injection pump, resulting in average concentration values of 0.73 ± 0.05 myM, 3.1 ± 0.2 myM, and 6.2 ± 0.2 myM. Simultaneously we injected a 2 mM Na2S solution at a continuous rate of 10 myl/s in order to quantify the titration-time required to reduce the JO2 to 50 % of the initial respiratory activity. Under the lowest oxygen concentration this effect was achieved after 3.5 [0.3;3.5] and 11.7 [6.2;21.2] min in the uncoupled and coupled state, respectively. This time was statistically significantly shorter when compared to the intermediate and the highest O2 concentrations tested, which yielded values of 24.6[15.5;28.1] min (coupled) and 35.9[27.4;59.2] min (uncoupled), as well as 42.4 [27.5;42.4] min (coupled) and 51.5 [46.4;51.7] min (uncoupled). All data are medians [25 %, and 75 % percentiles]. Our results confirm that the onset of inhibition of cell respiration by sulfide occurs earlier under a continuous exposure when approaching the anoxic condition. This property may contribute to the physiological role of sulfide as an oxygen sensor.