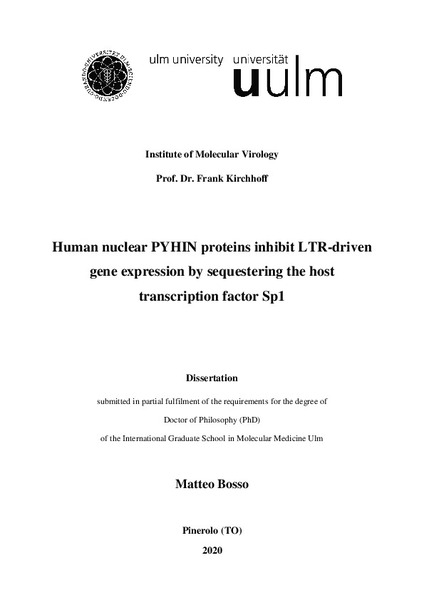 Replication of human pathogenic viruses such as HIV-1 is constantly challenged by selective pressures exerted by a large arsenal of host sensors and restriction factors. Consecutively, this drives selection of viruses able to neutralize or evade such host defenses. Human PYHIN proteins (AIM2, IFI16, MNDA and IFIX) are emerging players of the cell-intrinsic immune response. While AIM2 is a well-established cytosolic sensor of exogenous DNA, the role of IFI16 as a nucleic acid sensor is rather controversial. In turn, IFI16 is mostly known to inhibit viral replication by silencing viral gene expression of several DNA viruses. IFIX and MNDA have been shown to be antivirally active against two different herpesviruses, but their precise mechanism remained elusive. As such, the goal of my thesis was to elucidate if and how PYHIN proteins restrict replication of primary HIV-1 isolates. My findings revealed that IFI16, IFIX, MNDA and AIM2 are readily detectable in HIV-1 primary target cells and that all but AIM2 restrict viral transcription. Mechanistic studies showed that nuclear PYHIN proteins inhibit lentiviral gene expression by binding to and reducing the availability of the host transcription factor Sp1. In contrast, AIM2 did not exert antiviral activity. This is due to its physiological cytosolic compartmentalization, as artificial relocalization into the nucleus rendered AIM2 antivirally active. Deletion mutagenesis and functional analyses further revealed that the N-terminal Pyrin domain (PYD) is sufficient for the antiviral function, suggesting that the antiviral mechanism is independent of the DNA interaction and sensing functions of PYHIN proteins. Further experiments in both primary CD4+ T and in a latently infected T cell line further revealed the crucial role of Sp1 in promoting viral reactivation from latency and how this process is antagonized by IFI16. Interestingly, highly prevalent subtype C viruses evade these restriction factors by reducing their dependency on Sp1 for efficient transcription, and this effect seems to be dependent on the proviral LTRs. In conclusion, my results illustrate how nuclear PYHIN proteins commonly inhibit HIV-1 replication by targeting the host transcription factor Sp1. Finding that a highly prevalent HIV-1 subtype efficiently evades these restriction factors should stimulate further studies aimed at understanding which region in the proviral LTRs is responsible for this effect as well as the underlying mechanism. Notably, Sp1 is required for basal and induced expression of a plethora of cellular genes and it is known to play an important role in cancer. Hence, the PYHIN-Sp1 interaction should be additionally investigated outside of the context of viral infection, to shed more light on the physiological role of PYHIN proteins.