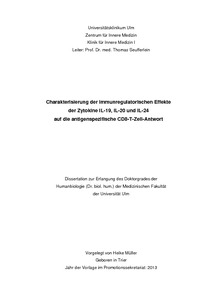 The function of the IL-10-related cytokines IL-19, IL-20, and IL-24 (IL-20-family of cytokines) is not well-studied. Here, IL20R2-/- mice were used to clarify the in vivo function of the IL-20-family of cytokines in CD8 T cell-dependent responses. Compared to B6 wild-type mice, the interrupted signaling of IL-19, IL-20, and IL-24 in IL20R2-/- mice significantly enhanced the de-novo-induction of antigen-specific CD8 T cells induced by vaccination with pCI/Ova or Ova/ODN1826/IFA. This demonstrates a clear effect of IL20R2 signaling in in vivo priming of CD8 T cells. The clinical outcome of this altered T cell response was analyzed in a T cell dependent inflammatory skin disease, the DTH. Here, IL20R2-/- mice were more sensitive in DTH response to Ova after vaccination compared to B6 wild-type mice. Thus, IL20R2 signaling in B6 mice has an immune suppressive effect in T cell dependent DTH regulation to Ova. The induction of DTH in IL20R2-deficient and wild-type OT I mice as well as the adoptive transfer of IL20R2-deficient and wild-type OT I CD8 T cells into wild-type hosts indicate that IL20R2 signaling inhibits CD8 T cell response not in a direct manner, but maybe via APC of the skin. In a second part of this work, the effect of the interrupted signal transduction of IL-19, IL-20, and IL-24 in IL20R2-/- mice were analyzed in the T cell dependent model of EAD. Primed preproinsulin-specific CD8 T cells lacking IL20R2 significantly enhanced EAD development in RIP-B7.1 mice compared to adoptively transferred preproinsulin-specific CD8 T cells of B6 wild-type mice. Accordingly, the EAD model confirms the down-regulatory effect of IL20R2-signaling in the priming phase of CD8 T cells. This work indicates that IL20R2 signals diminished antigen-specific CD8 T cell responses in an early phase and thus, the IL-20-family of cytokines affects the signaling network that down-modulates immune responses.