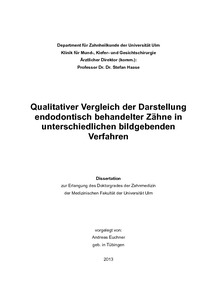 Assessing the quality of root canal fillings with different imaging techniques was the focus of this dissertation. For this purpose, 42 extracted human teeth were root canal treated under optimal in-vitro conditions using different processing and filling techniques and partly equipped with root canal posts. After this, recordings were made using micro computed tomography (micro-CT), cone beam computed tomography (CBCT), and magnetic resonance imaging (MRI). These were compared to each other and with the respective corresponding teeth x-rays. The following characteristics were evaluated: the preparation of the root canal system, the homogeneity, wall consistency and length of the root canal filling, the detectability of root canal instrument fractures, side canals, cracks and fractures as well as emerging artifacts. An expected accumulation of artifacts did not appear in the MRI scans. However, no root canal fillings were visible and therefore could not be assessed. The micro-CT recordings provided high-resolution, three-dimensional images and allowed a precise diagnosis with low artifact emergence. The CBCT recordings showed strong artifact formation that interfered with an accurate assessment of homogeneity and wall consistency of the root canal fillings. Fractured root canal instruments could not be distinguished with certainty from the remaining root canal filling. Even with a resolution of 150 microns, no side canals, cracks or fractures were identifiable. In terms of detail resolution, the artifact susceptibility and the functions offered in the diagnostic software shows a continuing need for development on the part of the manufacturers of CBCT scanners. The dental film recordings were free of artifacts, thus enabling a relatively good assessment of the quality of root canal fillings with simultaneous lower radiation exposure compared to CBCT. Root canal instrument fractures were also usually better recognizable using these recordings.