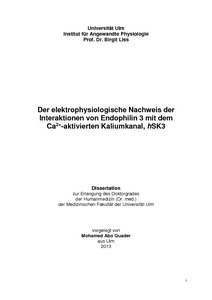 (hSK3) Small-conductance calcium-activated channels play an important role by controlling the after-hyperpolarization of excitable cells. Endophilin 3 belongs to a family of BAR- and SH3 domain containing proteins that bind to dynamin and are involved in the process of vesicle scission in clathrin-mediated endocytosis. Using the yeast two-hybrid system and the GST pull down assay was demonstrated that Endophilin 3 interacts with the N-terminal part of hSK3 channels. In addition, we studied the impact of this interaction on channel activity by patch clamp measurements in PC12 cells expressing endogenous hSK3 channels. hSK3 currents were activated by using pipette solutions containing 1 myM free Ca2+. Whole-cell measurements of PC12 cells transfected with Endophilin 3 showed a reduction of hSK3 specific Cs+ currents indicating that the interaction of Endophilin 3 with hSK3 channels also occurs in mammalian cells and that this interaction has functional consequences for current flowing through hSK3 channels.