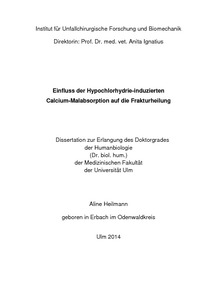 Calcium is an essential mineral in the human body, which is consumed with food and mainly embedded in bone. Gastric acidification plays a major role in the absorption of calcium and interruptions such as gastritis can lead to calcium malabsorption. In recent years, proton pump inhibitors (PPI), which are a class of pharmaceuticals commonly used against gastric diseases, were shown to increase fracture risk. PPI irreversibly bind to the proton pump of gastric parietal cells and inhibit gastric acidification leading to an elevated gastric pH and hypochlorhydria. Calcium carbonate, which is a calcium compound commonly found in calcium supplementations, is hardly soluble under neutral conditions and poorly absorbed in individuals with hypochlorhydria. Thus, the effect of calcium carbonate supplementation on bone metabolism and fracture repair is doubtful if hypochlorhydria is present. Because little is known about the influence of hypochlorhydria and calcium malabsorption on bone repair, fracture healing was analyzed in cholezystokinin-B/gastrin-receptor deficient mice (Cckbr-/-) having hypochlorhydria and an elevated gastric pH. After osteotomy of the femur, Cckbr-/- and wildtype (WT) mice received either a standard diet, a calcium carbonate diet or a diet containing calcium gluconate. Results of the present study showed that hypochlorhydria induced calcium malabsorption did not influence fracture healing. However, the malabsorption led to negative effects on non osteotomized bone such as a decreased bending stiffness. Calcium carbonate supplementation neither improve fracture healing, nor prevented the negative effects on intact bone. Calcium gluconate improved fracture healing in WT mice as well as in Cckbr-/- because it has a good solubility at higher pH in contrast to calcium carbonate. Positive effects on intact bone of Cckbr-/- were also found after administration of the calcium gluconate diet.