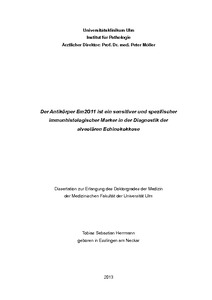 Echinococcosis is a life-threatening disease in humans that is caused by the larval stages of the fox tapeworm (Echinococcus multilocularis) causing alveolar echinococcosis and the dog tapeworm (Echinococcus granulosus) causing cystic echinococcosis. The eggs of the parasites are released with faeces of canids and humans are aberrantly infected. In humans, the larval stages of the parasites cause tumour-like lesions mainly in the liver and the lungs. Precise diagnosis of the parasite responsible for human disease is of utmost importance since therapy regimens largely differ between alveolar and cystic echinococcosis. Diagnosis is based on serology, imaging and histology, the latter being the gold standard. However, conventional histology cannot always clearly identify the causative parasite because both parasites can cause human tissue to present similar features. Therefore, we have developed an immunohistochemical technique using the monoclonal antibody Em2G11 which has a very high specificity for Echinococcus multilocularis. We have tried out this technique on a - compared to the total number of cases in Germany - large number of cases to compare its staining patterns for both parasites in human tissue. We have found out that this technique allows a clear-cut, reliable, cheap, easy-to-use and fast diagnosis of alveolar echinococcosis even on small bioptic tissue samples like aspirates or cutting needle biopsies making it much easier for non-experienced investigators to securely prove or exclude alveolar echinococcosis on paraffin embedded tissue samples of up to 60 years of conservation in formalin. This technique has disclosed an unknown feature of human alveolar echinococosis we have called "small particles of Echinococcus multilocularis" (Spems). Since these Spems seem to be in touch with the host immune system, we argue that they might shed a new light on the host-parasite interaction.