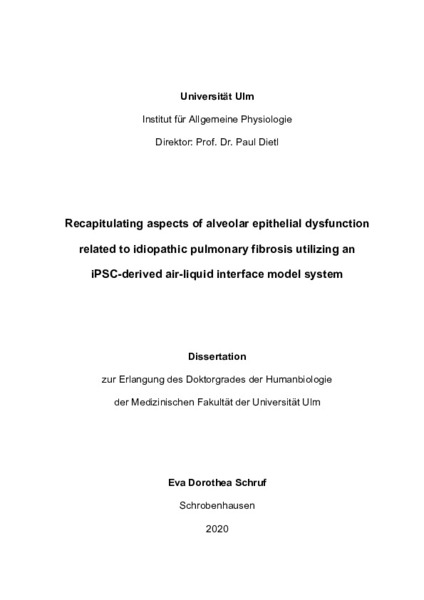 Limited access to primary human alveolar epithelial cells and the technical challenges associated with the in vitro maintenance and expansion of alveolar epithelial type II (ATII) cells, the proposed stem cells of the alveolar epithelium of the lung, have hindered advances in the understanding of the role of alveolar epithelial cells in lung homeostasis and disease. In recent years, directed differentiation of induced pluripotent stem cells (iPSCs) has emerged as a promising tool that allows for the de novo generation of specific human cell types from various different tissues, including alveolar epithelial cells of the lung. In the first part of this work, directed differentiation of human iPSCs was applied to establish a novel cell culture model of ATII cell differentiation at air-liquid interface (ALI). Initially, NKX2.1+ lung epithelial progenitor cells were generated from healthy donor iPSCs. Temporal modulation of Wnt signaling was then utilized to promote distal lung differentiation. Importantly, lung progenitor maturation towards ATII-like cells was carried out on Transwell inserts and the apical culture surface was exposed to air to mimic the physiological environment of the alveolar epithelium. The ATII-like phenotype of the cells was confirmed by the expression of ATII marker proteins, including Surfactant protein C (SFTPC), and the presence of lamellar body-like structures. The cell culture system reported herein represents the first iPSC-derived model of the alveolar epithelium that encompasses long-term ALI culture. In the second part of this study, the established differentiation protocol was utilized to develop a disease-relevant model system of epithelial dysfunction in idiopathic pulmonary fibrosis (IPF). IPF is a fatal disease of unknown cause that is characterized by progressive fibrotic lung remodeling. An abnormal emergence of airway-like epithelial cells within the alveolar compartments of the lung, herein termed bronchiolization, is often observed in IPF. However, the origin of this dysfunctional distal lung epithelium remains unknown due to a lack of suitable human model systems and the inability of existing animal models to sufficiently recapitulate IPF-related epithelial alterations. Recent reports have indicated that the pro-fibrotic cytokine milieu within the lung plays a critical role in the pathogenesis of IPF. Therefore, the iPSC-derived model system was stimulated with an IPF-relevant cytokine cocktail (IPF-RC) to investigate the effects of a pro-fibrotic environment on human alveolar epithelial progenitor cell differentiation. Stimulation with IPF-RC during differentiation increased secretion of IPF biomarkers and RNA-seq analysis of these cultures revealed significant overlap with human IPF patient data. IPF-RC treatment further impaired ATII differentiation by driving a shift towards an airway-like epithelial expression signature. These findings indicate that a pro-fibrotic cytokine environment has the potential to influence the proximo-distal differentiation pattern of human lung epithelial cells, suggestive of the pro-fibrotic milieu as a potential driver of alveolar bronchiolization in IPF. This study thereby describes, for the first time, the establishment of an iPSC-derived model system that recapitulates aspects of IPF-associated dysfunction of the human lung epithelium in vitro. In conclusion, this thesis has led to the development of a novel disease relevant platform for both basic research and preclinical drug discovery applications that allows researchers to model aspects of epithelial dysfunction within the human lung. This study further demonstrates the high utility value of human iPSC-derived systems to study complex pathophysiological processes. The insights gained from this work are expected to have an impact on future investigations of epithelial dysfunction in chronic lung diseases and may contribute to the opening of routes to novel therapeutic concepts.