Inflammatory response of cardiomyocytes after experimental polytrauma and haemorrhagic shock 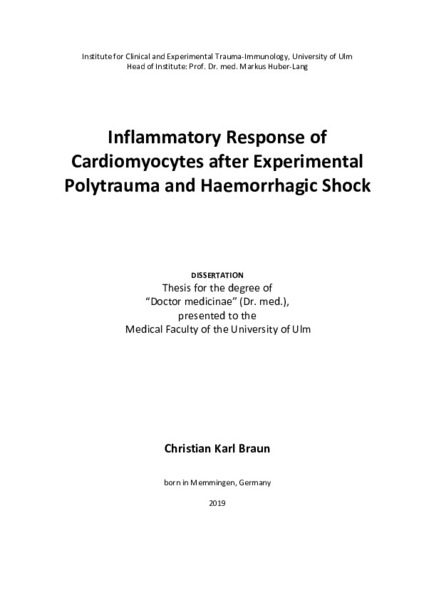 Morbidity and mortality from severe trauma and traumatic bleeding pose a significant burden on global health. Severe trauma, bleeding and consecutive shock result in a systemic inflammatory response syndrome (SIRS), evoked by a plethora of soluble mediators, both released from dying cells and actively secreted from parts of the immune system and may subsequently lead to multi-organ dysfunction. The pathophysiological mechanisms of post-traumatic SIRS resemble in part the systemic inflammation occurring during sepsis. In sepsis, these processes lead to an acute depression of the cardiac function with structural and morphological correlates in the cardiomyocytes (CM). While recent findings propose CM impairment after severe trauma as well, the exact pathological mechanisms and their implications for the clinical management remain unclear. The objective of this study was to characterise the morphological and molecular response of CM during the very early time period after traumatic injury. To evaluate the impact of multiple trauma and haemorrhagic shock (HS), specimens from a well-characterised rodent model of polytrauma (PT) and HS were analysed. To simulate PT, mice were exposed to blunt chest trauma, traumatic brain injury and a closed femur fracture under anaesthesia. Shortly after infliction of PT, a pressure-controlled HS was induced by blood-drawing to achieve a mean arterial pressure of 30 mmHg. After 60 minutes (min) of shock, mice were reperfused with crystalloids, and pressure was kept steady for another 120 min via volume perfusion and catecholamine administration on demand. Then, mice were sacrificed in deep anaesthesia and hearts were explanted. Untreated animals served as controls. From plasma, concentrations of cardiac troponin I (cTnI) and of the activated complement components 3 and 5 (C3a and C5a) were measured. To evaluate morphological alterations, a new histopathological damage score was developed and evaluated. High mobility group box nuclear protein 1 (HMGB1) and cleaved caspase 3 (CC3) as markers for cell-injury and apoptosis, as well as C5a receptor 1 (C5aR1) and C3a receptor (C3aR), the tissue-bound membrane attack complex (MAC) and the complement-inhibitor CD59 (cluster of differentiation 59) were analysed by immunohistochemistry (IHC). For spatial and quantitative evaluation of the gap junction protein (CGJ) connexin 43 (Cx43), IHC analysis and western blotting were carried out. In additional translational experiments, cultured human transduced CM were treated with anaphylatoxins C3a and C5a and histones for 6 hours (h), 12 h and 24 h respectively and cTnI and HMGB1 concentrations in the supernatant were quantified. The present study did show a significant increase of the cTnI plasma concentration, reflecting CM injury at this early time point after PT and HS. Evaluation of haematoxylin and eosin stained sections and IHC analysis of CC3 could rule out marked cellular necrosis or apoptosis as well as marked muscle ruptures and bleedings. However, PTHS animals presented with significantly increased tissue levels of HMGB1 levels, suggesting cell damage beyond the detectability of morphological alterations. Further, C5aR1 signal was significantly increased on IHC analysis while there was a significant drop in the C3aR signal. A significant decrease of the CD59 signal was accompanied with a slight, although not statistically significant increase of tissue bound MAC. These findings suggest an impact of the complement system on the response of CM to systemic inflammation after PT and HS, although in this study, no statistically significant change in C3a/ C5a plasma concentrations was detectable. IHC analysis of Cx43 showed spatial alterations and possible disruption of the CGJ, while quantification of Cx43 in the tissue did fail to show significant results. On translation into an in-vitro model of human CM, release of HMGB1 and cTnI could be reproduced by treatment with histones representing circulating damage-associated molecular patterns, whereas stimulations with C3a and C5a did not cause an increase of those markers in the supernatant. The results of this study provide first evidence of an early cardiac cell injury 4 h after PT and HS both on a systemic and a cellular level in the absence of microscopically perceivable CM damage. Further changes of the expression pattern of complement receptors, MAC and CD59 could be observed, leading to the assumption that the complement system is involved in the post-traumatic response of CM. The disintegration of the important CGJ protein Cx43 may lead to arrhythmia and further aggravate possible affections of the cardiac function after trauma and HS. To which extent these structural alterations translate to a clinically significant impairment of the cardiac function needs to be addressed in future investigations.