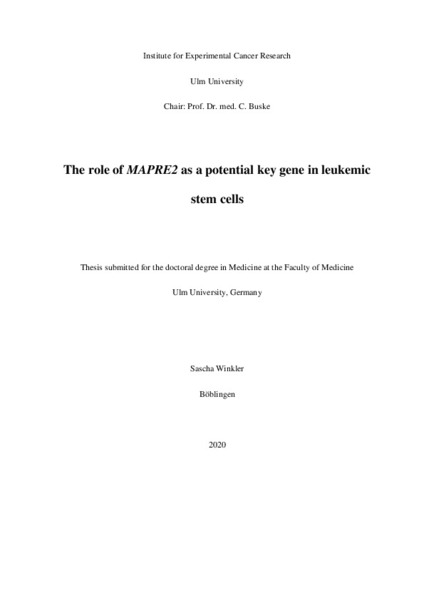 The cancer stem cell model proposes that malignant disease is initiated and maintained by a subpopulation of tumor cells with stem cell like properties, i. e. maintaining its self-renewal ability as well as multi-lineage differentiation potential. Due to their biologic features such as slow cell cycling, these cells are also thought to contribute to resistance against current treatment options as well as disease relapse. Thus, better understanding of the cancer stem cell’s (CSC) biology becomes a prerequisite for improved patient care. In the case of leukemic stem cells, it has been shown that a stem cell gene signature can predict disease outcome in human acute myeloid leukemia (AML), therefore underscoring the clinical significance of leukemia stem cells (LSC). In this study, we investigated whether MAPRE2 – a gene expressed in this stem cell gene signature – played a role in LSC biology. We conducted a gene knockdown experiment using shRNA mediated gene silencing in a mouse model of CALM/AF10 (phosphatidylinositol binding clathrin assembly protein / mixed-lineage leukemia; translocated to chromosome 10) positive AML. We assessed both in vitro properties such as proliferation and colony formation capacities. Furthermore, we transplanted lethally irradiated mice to find out whether knockdown of Mapre2 had an effect on leukemogenesis in vivo. We could show that reduced expression of Mapre2 had no effect on proliferation or colony formation properties in the CALM/AF10 positive mouse model. Knockdown of Mapre2 also did not have an influence on overall survival in vivo. A potential explanation for these results is the silencing of the SFFV (spleen focus-forming virus) promoter used in our lentiviral constructs, as evidence for vector silencing in vivo has been presented. Further possibilities include functionally redundant cellular pathways, a discrepancy between human and murine leukemia and the corresponding genes governing stemness properties as well as insufficiency of single gene knockdowns in an aggressive leukemia model. Future studies using different vector systems and studies in human AML cells will help to define the role of MAPRE2 in leukemogenesis and LSCs.