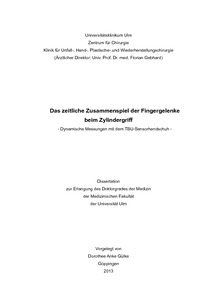 Purpose: The cylinder grip is a complex, dynamic interaction of the individual fingers, in which the finger joints are characterized through their range of motion and chronological order of this motion. With this study we want to assess whether there is a universal pattern of the finger joints’ motion and if so, to describe this pattern. Methods: Forty-eight subjects performed five cylinder grips with different object sizes. The fourteen joint angular profiles of the five digits were measured dynamically with the TUB-sensor glove. Results: Looking at the chronological sequence of the three joints in a finger, flexion is normally initiated either at the MP or PIP joints, with the DIP joints significantly starting motion last. At the end of active flexion, i.e. at the point in time when the fingers reach their final position around the object, the joint sequence was different than at the beginning. Here the only statistically significant observation was that the DIP joints fully flexed following the MP joints. When analyzing the four MCP joints as well as the four PIP and four DIP joints, the following can be observed. The synchronization of four identical joints was significantly higher than synchronization of the 12 finger joints. While synchronization was already high at the beginning of the flexion motion, it increased significantly when the joints completed their movement. Conclusion: This study shows that the dynamic interaction of the finger joints during the cylinder grip follows a certain pattern.